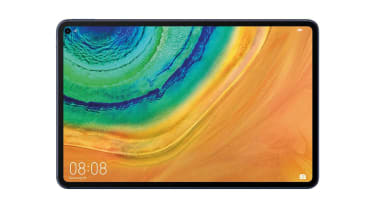 On the face of it, the MatePad Pro faces the same problems as the Huawei P40 Pro Plus. Thanks to the US trade sanctions, it doesn’t have access to Google’s apps, Play store or services – and many popular apps rely upon the latter.

However, the types of apps people use on tablets are different to those on phones. There’s less reliance on location services, powered by Google, and we found the lack of direct access to the Google Play store wasn’t an issue. If we needed to grab an app not available on Huawei’s AppGallery store, we could legitimately copy it over from our phone; that worked fine for Netflix and Spotify. Microsoft Office is even available direct from AppGallery. While the iPad family still has a far greater range of tablet-friendly apps, if you just want something to watch films, browse the internet and do light work on, the MatePad Pro meets those needs admirably.

For instance, we typed this review in Microsoft Word on the tablet using a Bluetooth keyboard and navigating Android with a mouse. It’s surely no coincidence that Huawei is actively pushing people to buy a bundled version of the MatePad Pro, which adds the M-Pen stylus (sold separately for £100) and MatePad Keyboard (£130) with the tablet for £610. Sadly, Huawei couldn’t send a stylus or keyboard in for review.

The feeling of a desktop in disguise is enhanced by the operating system’s Desktop mode, which you can activate from the settings bar. Similarly to Samsung’s DeX mode, click it and you switch to a windowed environment, complete with a Start menu and the ability to work with two windows side by side.

This does highlight the screen’s relatively small size, however. As we mentioned in our iPad Pro review, you need a big screen to take true advantage of a modern tablet’s power, and while the MatePad Pro’s 10.8in display is 0.6in larger than Apple’s vanilla iPad, it still feels cramped once you start doing ‘real’ work on it.

The screen itself is superb. We measured its peak brightness at 454cd/m2, which is lower than the 540cd/m2 Huawei claims but enough to cope with direct sunshine. You can choose between Vivid and Normal modes, with Vivid close to the DCI-P3 colour space – it covered 96.3% in our tests – while Normal echoes the sRGB gamut (94.9%). The panel’s accuracy was excellent in both, with an average Delta E of 1.1. 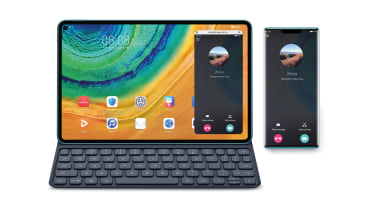 This is a powerful device too. It uses Huawei’s Kirin 990 processor, which keeps pace with the top-of-the-range Snapdragon. A score of 2,915 in Geekbench 5’s multicore benchmark nudges ahead of the Galaxy Tab S6 and is twice that of the iPad, and it’s a similar story for 3D acceleration. The only faster tablet is the iPad Pro, and that has a price to match. Battery life is also better than the iPad’s, lasting 12hrs 21mins in our rundown test.

There are other minor advantages it holds over its Apple rival. Its camera setup is superior, with both the 13-megapixel rear camera and 8-megapixel front camera producing sharper results than the iPad. Its speakers are also surprisingly powerful, while the array of microphones is extremely effective at picking up voices. In this videoconferencing age, it’s a fine tool.

The MatePad Pro is only available in Midnight Grey in the UK. While that is indisputably boring, you don’t notice it in use because the screen occupies so much of the front; that’s in stark contrast to the bezel-laden basic iPad. What you do notice is the solidity of the chassis and its matte finish, which means minimal smudges.

Then come two surprises. First, Huawei makes no waterproofing claims. Second, it only states that the rear is made of glass fibre, which means no Gorilla Glass protection. You should factor in accidental damage insurance for maximum peace of mind.

It doesn’t help that the MatePad Pro - which includes 128GB of storage – costs £51 more than the equivalent iPad. It only pulls ahead for value if you take the bundle deal into account, as the iPad’s Smart Keyboard costs £159 and the Apple Pencil £89. Huawei would no doubt prefer us to compare the MatePad Pro to the iPad Pro, but the two are in a different league when it comes to flexibility.

The quality of its iPad opposition means the MatePad Pro misses out on an award, but this is still an excellent tablet – and one that surprisingly isn’t hobbled by the lack of Google apps.