iOS 13.5 update makes it easier to unlock an iPhone while wearing a mask 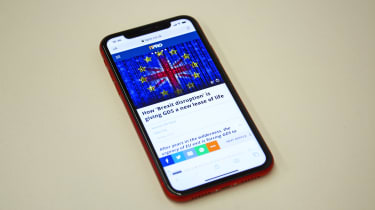 Apple has officially released iOS 13.5. The update boasts two new features that are a direct result of the coronavirus pandemic. Changes made to Face ID will make it easier for mask-wearing iPhone users to unlock their devices. Apple has also updated devices to provide support for the first phase of Apple and Google’s exposure notification system.

In previous iOS versions, there was no way to unlock an iPhone while wearing a protective mask. Users noted that Apple’s Face ID feature simply wouldn’t work. Instead, users were being forced to wait until their device would let them enter a passcode to unlock their iPhone.

ith iOS 13.5, though, a mask-wearing iPhone user can swipe up from the bottom of the device’s screen to enter the passcode screen and unlock their phone. Though users won’t be able to use Face ID to its fullest while donning a mask, the update will help.

Not quite as exciting, but the iOS 13.5 update also aims to address recent issues with FaceTime. By changing FaceTime’s settings, users can now turn off the speaking feature, effectively stopping the tile of the person speaking from getting larger. Instead, users can now opt for a simple grid style view.