Vivaldi Android app comes out of beta too 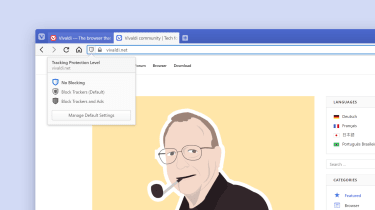 Vivaldi has announced the launch of version 3.0 of its desktop web browser, which will feature a DuckDuckGo-powered integrated tracker blocker.

The company, which been busy positioning itself as a highly customizable alternative to Chrome, Edge and Firefox, also confirmed that it's bringing its Android browser out of beta and plans to release it to the public.

Vivaldi 3.0 also gains a built-in ad-blocker, but it will be disabled by default as Vivaldi believes most users don’t want to prevent sites from generating revenue.

To adjust the ad-blocking feature for each site, click the shield in the URL bar, and choose the level of blocking you want for that site. You can also make global changes to the ad-blocker by clicking the shield and then clicking “Manage Default Settings.” This allows you to block ads and trackers from all sites.

“Now more than ever, humanity needs an internet that’s well-functioning and open but also private and secure. With the new Vivaldi, users can browse with its wealth of features freely and efficiently without being tracked online,” Vivaldi co-founder and CEO Jon Stephenson von Tetzchner shared in a press release.

Tetzchner also announced that the company would officially release its first Android app from beta. The Android app offers many features that desktop users may already be familiar with, including being Speed Dials, which includes customized grids of bookmarks and notes saved in the browser.

According to the company, the Vivaldi Android app also includes the company’s new tracker blocker. Smart device users with Android Lollipop OS or newer can download the app, which has been in beta since September.

Tetzchner continued: “As we navigate the difficult times of the pandemic together and with millions of people working remotely across the world, the browser takes center stage. The new Vivaldi, both on desktop and mobile, represents the evolving needs of today’s savvy internet users.”

Want to try the new Vivaldi browsers? You can download Vivaldi 3.0 online or the app at the Google Play store.