IT Pro Panel: What does professional development look like for CIOs? 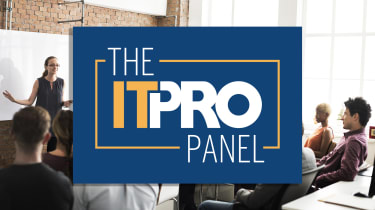 The upper echelon for those in IT and digital employment is becoming part of the C-Suite, part of the board, and a vital strategic member of how an organisation is run. That could be from the position of a Chief Information Officer (CIO), Chief Technology Officer (CTO) or Chief Digital Officer (CDO), amongst many others all of which have different responsibilities within organisations.

These roles do share something in common, however; the fact that there is no usual' pathway beyond this point. Many CIOs go on to become COOs or CEOs, while many CTOs switch from working in non-tech organisations to becoming CTOs at tech vendors. But in regards to how they make these leaps, or learn new skills, there isn't a designated pathway.

It's a complicated question: after getting so far up the ladder, how do you continue to develop as a professional?

Former Specsavers and HMRC CIO Phil Pavitt suggests the CIO job can be a lonely one within the business, but that IT decision makers (ITDMs) should venture out and work with other CIOs as well as meeting with investors, innovators and suppliers if they're to develop their careers.

"I spend a lot of time with other CIOs and CEOs and a lot of time in the West Coast of America meeting companies. It's important to learn from these peer points for self-development," he states.

Many of these opportunities arise at business conferences, but Aaron Powell, chief digital officer at NHS Blood & Transplant (NHS BT) suggests that ITDMs should be very selective with which events they attend.

"There will be endless conferences and networking summits' to attend but you have to be able to select from these wisely to ensure that, firstly, the speakers actually have something interesting to say and have done it, rather than talking about what they would like to have done or have only done in pilot mode; and secondly, that you're not simply going to be sat in front of suppliers all day trying to sell you technology that you have no interest in," he says.

But it's not just the peer group that ITDMs cite as a good way of learning more; Mark Ridley, group technology officer at venture builder Blenheim Chalcot, says he tries to seek out mentors as well as peers.

"I regularly try to find people who are smarter than I am, who have more experience than I have so I can essentially just learn from what they've done, which I find more important than book-learning," he explains.

"I then try to return that favour as well actively mentoring younger people in tech and digital," he adds.

Reverse-mentoring', a term used by Omid Shiraji, interim CIO at Camden Council to describe being open-minded enough to take the opportunity to learn from the people who are being mentored, is also important.

"Mentoring others has helped me in improving my self-knowledge and understanding areas for development," he says.

Both Ridley and Shiraji also like to connect with executives who don't necessarily work within IT to gain different perspectives of how IT and digital fit into the organisation.

Shiraji credits his executive masters in information leadership with providing him an ideal foundation for a digital leadership role. The course combined practitioner-led workshops and academic seminars, which gave him a range of skills and helped him to grow his network both of which he has used as a CIO.

Ridley has taken on courses in IT and outside of IT, both of which he says have helped him to develop as an IT leader; he did a week's boot camp in MIT last year which focused on entrepreneurship, and he has taken on IT courses such as Andrew Ng's course on machine learning through Coursera.

But while Pavitt and Powell suggest there isn't a huge need for structured courses for CIOs and other IT leaders, Ridley disagrees.

However, he admits that a CIO-dedicated course that could teach IT leaders things they didn't know and take them out of their comfort zone doesn't necessarily exist.

"I think if you could get that and distil that type of professional learning, where it is group learning, in a structured way, with practical sessions and a group of peers around me, it could work," he says.

Meanwhile, Shiraji advises ITDMs to read books in what little of their own time they have, too.

"I was once told by a former boss that there is a book for every problem advice I have found useful in my career. The Adventures of an IT Leader and Staying the Course as a CIO are two must reads for any CIO both providing different perspectives and tips on being successful in the role," he says.

He adds that insight can also be gleaned from research organisations such as Gartner and McKinsey.

However, Powell is sceptical about the advice that comes from many of these types of organisations.

"There are lots of consultancies and advisory organisations that will tell you that they have the latest thinking and the latest formula for CIO success. In my experience, generic models aren't that effective and you need to define the model that works for you and your organisation, not take the latest off-the-shelf proposal from an advisory firm," he says.

The same sentiment can be extended to IT leaders different models work for different CIOs, CTOs and CDOs in regards to their professional development. There may be a gap in the market for a course tailored to these IT leaders, but it would be extremely hard to make this a reality as every IT leader is looking for different skills to develop.

If you're a senior IT decision-maker and you'd like to apply to be part of the IT Pro Panel, please email panel@itpro.co.uk.