The whopping big phablet from the makers of the Nexus 5 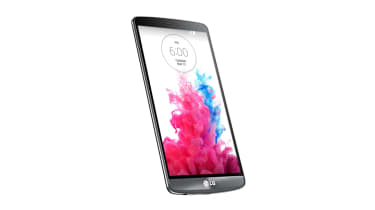 TV maker LG was almost unknown for its range of Android phones until it was revealed that the Korean giant is the company that actually makes the Google-branded Nexus 4 and 5 smartphones. The G3 is LG's flagship phablet - a smartphone that's so big, it could almost be considered a tablet.

The G3 is a mammoth phone due to its huge 5.5in screen. It's very difficult to hold and use single handed unless you have big hands. It's so cumbersome that we managed to drop it several times accidentally.

Although the back cover did come off, and the removable battery tumbled out, the phone was unscathed despite smacking onto concrete pavements without any case to protect it. The phone looks like it's made out metal, but it's actually just plastic. Unusually the power and volume buttons are on the back of the phone, rather than the sides, and are slightly recessed to prevent accidental presses.

The G3 is the first phone to have a screen with a gargantuan resolution of 2560x1440 pixels which is usually reserved for tablets and desktop monitors. The screen doesn't actually display any more information than a phone screen with a 720p or 1080p screen, though.

The extra pixels are used instead to increase the sharpness of text, but we only notice a slight increase in sharpness, if that, when compared to both the Sony Xperia Z2 and the iPhone 5S. It's still a good quality screen - bright with accurate looking colours.

LG tries to compensate for the unwieldy size of its screen by including a setting to shrink the size of the onscreen keyboard and dial pad so that they're easier to use with a thumb. This looks farcical but it definitely helps, although there's no shortcut for quickly turning it on and off - you instead have to make a laborious trip to the buried option in the Settings.

LG has modified Android 4.4 KitKat in other ways, many of which will be familiar to owners of Samsung's Galaxy Note range of phablets. You can run two apps side-by-side simultaneously, although doing so can be very cramped and only a handful of apps are supported.

The phone can use the front-facing camera to track your eyes so the screen doesn't go to sleep when you're reading a long block of text. It didn't always work, but it had a higher rate of success than the same feature on the Galaxy Notes. You can also quickly scribble notes on the screen with your finger, handy for quickly jotting down phone numbers for example.

Many of LG's additions are of little value, though. The option to unlock the phone by tapping the four corners of the screen in a pattern you set is hardly more convenient than using a PIN or slide pattern. The Smart Notice personal assistant tries to provide useful reminders, such as reminding you to return a missed call, but most of its functions aren't that helpful or are already included as part of Google Now.

We had no complaints about performance - the phone's quad-core processor and plentiful memory made short work of our benchmarks. Battery life was in line with what we expected. When used for web browsing, photography, GPS and making calls, it lasted 22 and a half hours on 4G and 25 hours on 3G.

LG claims its 13megapixel camera uses lasers to achieve superfast autofocus and it is a split second or two faster than other smartphone cameras. This doesn't sound like much, but could be crucial for capturing fleeting moments.

Photos in both bright sunlight and darker conditions were sharp and reasonably detailed, but there was also a lot of noise. It can record video in 4K which is more detailed than HD video, but you'll need a 4K TV or monitor to see the difference.

The LG G3 is a good phablet, but its super high-resolution screen isn't a huge benefit and other large Android phones are even better. The Sony Xperia Z2, for example, is waterproof, has a better camera and longer battery life too.

A fast, capable flagship with a jumbo screen and a bumper resolution, but those without large mitts, beware...