Google Cloud CTO: To win the enterprise, we need to cut the tech jargon 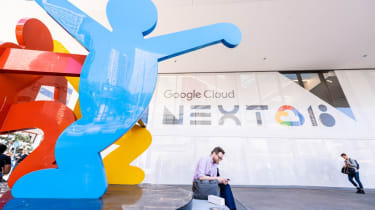 Over the past four years, Google Cloud has undergone a major shift in business focus, moving from a company that prioritised large tech and mobile companies over the enterprises that it builds its services for today.

Google Cloud has cause to celebrate, having been recognised for its enterprise readiness faster than analysts expected, especially in infrastructure, API management, and content collaboration. Yet the company faces stiff competition from AWS and Microsoft, both of which have fortified their positions in the market with the help years of experience and brand recognition.

However, CTO Brian Stevens claims the company isn't interested in taking the market lead in what he feels are now outdated metrics.

"AWS earns the props for having invented the market, and so there's a lot of familiarity that people have with AWS tools because that's often where people have started," says Stevens, speaking to Cloud Pro at Google Cloud Next 18 this week. "They have the audience; they don't have the technology."

"The challenge and the competition is how do we be the best at working with customers directly, or through partners, to make it easy for them, whether it's the mundane thing of how do you do cloud for backup, or how to build advanced analytics applications. Because otherwise, you're just competing with others for the small part of the market.

"You want to be competing for the big part of the market - which is the stuff that hasn't changed yet."

'We need to focus on customer stories' 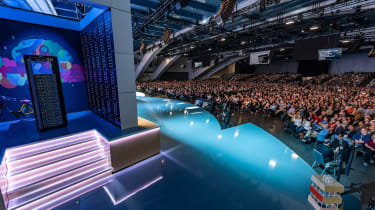 Google has arguably been at the forefront of cloud innovation over the past few years but, faced with highly disruptive technology, businesses have been reluctant to buy into ideas that are yet to have a clear use case.

This year Google Cloud announced its Edge TPU chip, bringing inference machine learning to the edge. It's a product of three of Google's research divisions: software, hardware and AI - something that Google claims to be the first to have achieved in IoT. Yet with that comes an idea in its infancy that's inherently difficult to sell.

Stevens admits that Google's tendency to lean on the technical side when selling products has meant the company has poorly communicated its innovations to the wider industry.

"It's kind of a difficult problem," says Stevens. "There's a whole long tail of basics - you have to do security this way, you've got to deal with encryption this way, you have to have firewalls... there's a tonne of obvious things that are really easy to explain, but there's a lot of things that we're building that have never existed before."

"It's a general industry problem, but I do feel that today it's far easier to explain, for example, autoML, than it is to explain deep learning and TensorFlow to somebody. It's a really complicated story and we're trying to explain it to the masses when only data scientists speak your language."

He argues that to improve communication with industry, Google needs to instead turn to real-world use cases and let customers tell the stories.

'It's nice to no longer be talking about the mundane' 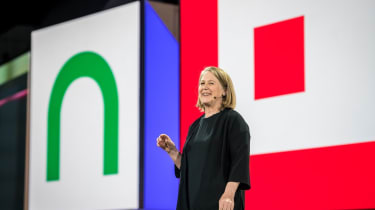 Diane Greene at Google Cloud Next 2018

Speaking on stage at Next 2018, CEO Diane Greene said that the company was "proud of being cutting-edge" but also "proud of having the table stakes that an enterprise needs", referring to traditional cloud services such as infrastructure and security that businesses look for.

However, Stevens suggests conversations around these table stakes has become "mundane", and that, under his leadership, Google is poised to start shifting its focus away from these areas, if not in terms of research and investment then certainly in its engagement with customers.

"I think the most important thing is that we're no longer out there talking about table stakes, and table stakes capabilities that people need," said Stevens.

Instead, he points to the announcements at Google Next as being indicative of a new direction, whether that's machine learning and IoT, or hybrid computing.

"It's like all of a sudden, 'oh wow, this isn't just are Google's VMs better? This is like 'I can do something I couldn't do, I couldn't do these IoT systems, I couldn't run a managed service cloud inside my own data centre'."

"I think those are really interesting moments. When you walk around the halls and you hear people talking... they're not talking about the mundane anymore."