You complained, Microsoft listened by adding a longer cable and USB-C ports 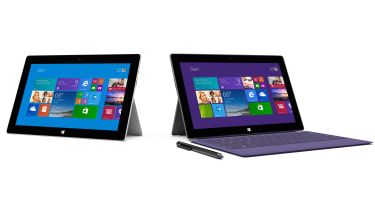 Microsoft is reportedly planning to launch an upgraded Surface Dock with a longer cable and two USB-C ports.

While sleekly designed laptops and tablets have become the choice for many consumers, there’s often a price to pay when opting for such a design, as ports often come in short supply. Microsoft currently offers users the Surface Dock to compensate for this lack of ports, and Dr Windows reports that the company has a new model on the horizon to address a number of user complaints.

According to the report, the new and (hopefully) improved Microsoft Surface Dock 2 replaces the older dock’s Mini Display ports with two USB-C ports. The device will also come equipped with a longer cable that connects via the proprietary Surface Connector. Rumor has it, this cable will deliver 200 watts of power, which is more than twice the first-gen Microsoft Surface Dock’s output.

These upgrades will likely mean a jump in price, though. Microsoft has yet to confirm the details, but the Surface Dock 2’s online listing shows a $270 price tag. For reference, the current Surface Dock which rings in at $199.

The current Microsoft Surface Dock has not been a hit among its users. Many have complained the device’s cable is too short to connect with a Surface Laptop or Surface Pro. Other users have cited its 95-watt output isn’t enough to drive the Surface Dock and the USB peripherals attached to it. Further, consider the device’s lack of USB-C port and unknown USB errors users have cited, and it’s no wonder Microsoft has been developing an improved dock.