This machine should last for years, and the super-bright IGZO screen is a delight 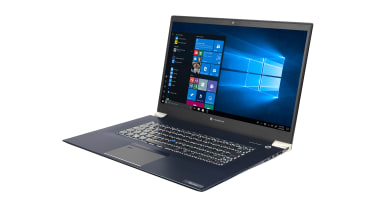 We’ve seen a couple of Dynabook laptops since Sharp bought and rebranded Toshiba’s laptop division, and it’s safe to say that everything is business as usual. If your company has been buying Toshiba laptops for years, the only obvious change is the logo shifting from one to the other.

Security and manageability still come high up the company’s priority list, with a solid magnesium chassis, webcam cover and trusted platform module in place. Dynabook has also embraced newer technologies such as Windows Hello, with an infrared webcam and fingerprint reader both supplied with this configuration, along with a card reader that’s integrated into the right-hand side.

If you haven’t seen a Tecra for a while, you may be surprised by the X50-F’s sleek lines - especially when you consider that it’s a 15in machine. Vital stats include a 1.36kg weight and 17.6mm height, and it looks professional with a brushed metal “onyx blue” finish. Think of it as a solid worker, but one who likes to hit the gym rather than the pub after hours.

It has all the ports you’re likely to need, with twin Thunderbolt 3 ports on the right along with a microSD slot and full-size HDMI output. Two old-style USB ports and a combo mic/headset jack sit over on the left.

The retro theme continues to the keyboard, with a trackpoint sitting snugly between the central buttons. The keys have a solid feel that should please touch typists, with the only annoyance being the spacebar – this ends under the N rather than the M, and we didn’t enjoy having to adjust our muscle memory. What we did appreciate were the separated-out cursor keys and large Enter key. The touchpad is top-quality, too.

But the real revelation here is the screen. It’s a Sharp IGZO panel that, we’re told, consumes roughly 1W of power compared to 2W of the previous 15.6in screens Dynabook/Toshiba has used. And it helped battery life: we tested both an IGZO-equipped Tecra and a touchscreen configuration that uses a standard IPS panel. The IGZO version lasted for 8hrs 50mins in our video-rundown tests (with the brightness set at a standardised 170cd/m2), the touchscreen version 7hrs 51mins. 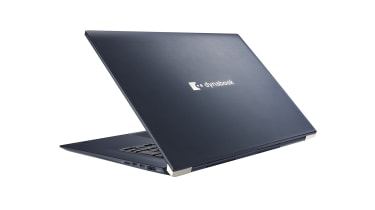 There was an even bigger gulf between the two when it came to quality. Just compare the results across our tests: the IGZO-equipped Tecra peaked at 510cd/m2 brightness versus 295cd/m2 for its IPS sibling. It covered 98.8% of the sRGB colour space compared to 53.1%. And you can guess which had an average Delta E of 0.3 and which had 4.81 (the closer to zero, the more accurate the panel’s colours). Unless you have a clear business reason for choosing a touchscreen, or it comes at a knock-down price, we can see no reason to choose anything apart from the IGZO version of the Tecra X50-F. (You can spot this by the brightness claims, with the IGZO versions having a stated "470 nits" brightness level.)

It’s only a shame that Dynabook has stuck with eighth-generation Core processors, which look slow compared to their tenth-gen counterparts. Dynabook opted for the Core i7-8565U in our test machine, and with 16GB of RAM it had plenty of support. Also note the 512GB Intel Optane SSD, which has 32GB of cache to smooth everyday operations.

Its overall score of 87 would have been closer to 100 with a tenth-gen chip inside, but we doubt many people could spot the difference in day-to-day use. The only point it becomes obvious is for tasks that require 3D acceleration, with Intel’s ageing Ultra HD 620 graphics meaning that after-hours gaming, for example, will be limited – it averaged 40fps at 720p in Dirt: Showdown once we dropped down to Medium settings.

We'd happily recommend the Dynabook Tecra X50-F to a small business. It's a lightweight 15in laptop that looks good, has great battery life and prioritises security. Just don’t choose the touchscreen option!