What to look for in a mesh Wi-Fi network

There’s plenty of choice when it comes to mesh systems: here’s how to pick the one that’s right for you 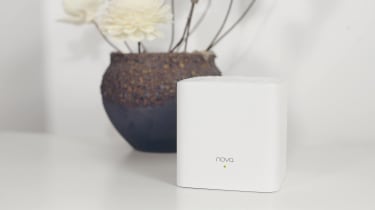 Networking has always been one of the most headache-inducing parts of IT maintenance, and wireless connectivity used to be especially annoying. In previous years, if your wireless connection wasn’t strong enough to reach as far as you needed it to, you didn’t have many options beyond installing a range extender (with severely limited speeds). Now, however, we have the wonders of mesh Wi-Fi networks to solve this problem.

What is a mesh system?

Simply put, a mesh system is a set of Wi-Fi access points that broadcast a wireless network all around your premises. Normally, one unit (or “node”) takes the place of your old router, while a second is located in a nearby room and rebroadcasts the wireless signal, so it can reach further than a single transmitter would be able to do.

This may sound familiar, because standalone Wi-Fi repeaters work on the same principle. However, many mesh systems can hit speeds a regular repeater can’t match, and what specifically defines mesh systems is that you can add a third node beyond the second one to expand your network even further.

In this way, a mesh system can give you wireless coverage over a far greater area than an individual router could manage. Two or three nodes will suffice for most homes, but if you have a particularly large premises to cover – or thick walls that weaken the signal – there’s nothing stopping you from adding a fourth or even a fifth unit.

Not all meshes are created equal

Almost all of the mesh systems you’ll find on sale work in the way we’ve described above, but a few significant things differentiate them.

One is the speed of the built-in radio transmitters. All current mesh systems broadcast on two frequency bands – the 2.4GHz band, as used by very old computers and lightweight IoT devices, and the 5GHz range, which gives better performance for modern laptops and phones. Manufacturers will publish a speed rating for both of these bands, which might typically be 300Mbits/sec at 2.4GHz and 867Mbits/sec over 5GHz. These numbers are theoretical maximums, so don’t expect to get anywhere near them in real-world use, but they give a rough idea of relative performance, as higher ratings generally correlate with faster connection speeds.

Another factor that affects performance is the size and number of internal antennae. This information isn’t always easy to find out, but nodes that are physically on the large side are likely to contain bigger aerials, allowing them to deliver a stronger signal with fewer lost packets and a faster overall connection. MIMO (multi-in, multi-out) capabilities play a role too: if a system boasts 2x2 MIMO, that means it can boost data rates by sending and receiving data on two aerials at the same time. MU-MIMO (multi-user MIMO) is also worth looking out for, as this means one antenna can be talking to one client, while another is simultaneously serving a different device.

A final thing to consider is radio bands. A dual-band mesh system has only one fast 5GHz radio, which has to handle not only your connection to the internet but also all the “backhaul” traffic that’s being passed back and forth between nodes – which means that only around half of its bandwidth is available for you to use. To get around this, high-end products implement a tri-band design, which includes a third radio transmitter, using a different part of the 5GHz radio band, that’s dedicated to backhaul traffic. You will have to splash out more cash for a tri-band system, but it almost always means you get a faster connection.

How much speed do you need?

When it comes to upgrading your network, you might assume that you want the fastest connection possible. Indeed, maybe you do: if you have multiple clients wanting to move large quantities of data around your network, you’ll love the higher-end products, which can deliver transfer speeds of over 30MB/sec.

However, not everyone has that need for speed. A 15MB/sec wireless connection is sufficient to stream two 4K videos in HDR at once, and surf the web at the same time. If you don’t require more than that, you can save money by buying a mid-range mesh system – although, of course, there’s nothing wrong with allowing yourself a little headroom in case your needs change in the future.

If you’ve been keeping up with the network market, you’ll know that the new 802.11ax standard – officially branded as Wi-Fi 6 – is already with us, providing faster speeds and a smoother ride when lots of devices want to connect at once. The tech hasn’t yet made much of a splash in the mesh market, though: right now, the only extender system on the market that supports the new standard is the Netgear Orbi WiFi 6, and it’s very expensive indeed. That’s not surprising, as its tri-band mesh design uses no fewer than six next-generation Wi-Fi radios.

Our expectation is that further Wi-Fi 6 mesh systems will appear in the coming months, but it will be years before the prices fall to anywhere near the levels of current-generation hardware. So if you’re suffering from a poor signal, we suggest you dive in and invest in a solution that will deliver strong speeds right now, rather than waiting what could be a very long time for an affordable next-generation solution.

Do you still need Ethernet?

The future may be wireless, but Ethernet remains faster and more stable than a Wi-Fi connection, making it ideal for things such as NAS appliances and workstations. Ideally, we like to see four Gigabit Ethernet sockets on the back of the primary mesh node, but many manufacturers provide only two, particularly on cheaper systems. If your chosen mesh system is short on ports, it’s not the end of the world: you can buy a five-socket Ethernet switch for under £20 and use that to hook up extra wired clients.

There’s another use for Ethernet sockets. Although all mesh systems are designed to talk to one another wirelessly, most also support wired backhaul. If the connection between your nodes is flaky, or if you want to maximise the bandwidth of a dual-band system, running a cable between stations could be the answer. The only catch is that, depending on the layout of your building and the placement of your nodes, this may not be convenient or elegant.

We’ve talked a lot about performance, but usability is a key consideration too. The majority of mesh systems nowadays can be set up and managed from a smartphone app: this is a handy option, but the interfaces aren’t always particularly intuitive or responsive. We prefer an old-school web portal, with menus and buttons that you can navigate with a mouse.

It’s also worth looking into the feature set. As we’ve mentioned, most mesh systems are designed to replace your router, and they’re fully able to take care of things such as dishing out IP addresses and operating a guest network. However, very few of them offer as broad a range of advanced features as a high-end router. If you want things like custom IP ranges and port forwarding – so you can, for example, run server applications from inside your network – be sure to check that your chosen mesh platform supports them before investing.

There are some extras you might want to keep an eye out for too. Certain products feature a built-in VPN server, allowing you to access your entire network remotely over the internet. Another thing that’s becoming increasingly popular is a network security service, which can block malicious websites and raise the alarm if suspicious activity is detected – although this normally involves paying a regular subscription.

Other things to look for

Not all the features you might expect can be taken for granted. A decade ago, most routers supported WPS, which lets you connect devices to the network by simply pressing a button, rather than entering a passphrase. But security concerns have since seen this fall somewhat out of favour – it’s supported on some mesh systems, but by no means all.

It’s a similar story with band splitting. It used to be the norm for dual-band routers and extenders to broadcast two separate networks, with each radio band having its own SSID. This made it easy to make sure your 5GHz-compatible clients were connecting on the appropriate band, while legacy devices could connect to the 2.4GHz network. Today, most mesh systems bundle both bands together under a single network name. 5GHz-capable devices should automatically connect at the right frequency, but if you’d prefer to determine that yourself, look for a product that supports band splitting.

A final feature that’s less useful than it sounds is integration with Alexa – and, in a few cases, with the Google Assistant. This typically allows you to turn the guest network on and off with a simple voice command, but for reasons of complexity and security there’s normally not a lot else you can usefully do. The precise command set varies from manufacturer to manufacturer, however, so if the idea appeals then check out the website to see what exactly you can do.

If you’re not happy with the feature set of your chosen mesh system, you don’t necessarily have to lump it. Although most meshes are designed to take over the role of your old router, they can also be switched into AP or bridge mode, in which their own router logic is disabled and they act solely as wireless access points for your existing router.

This can be an appealing solution if you’re using an expensive router with advanced features that a mesh system doesn’t replicate – or if you simply need to use your ISP’s own router in order to connect to the internet. If possible, it’s a good idea to switch off the router’s own wireless services, to minimise confusion and possible radio interference.

If you really want, you can even operate both networks at once, with your mesh system connecting to the internet through your original router. You might do this if you wanted to use the mesh system’s parental controls within its own wireless network, while still allowing other clients to access services provided by the main router. Try this with caution, though, as it can lead to problems with port forwarding, QoS and other network services – look up “double NAT” for more information.