How to screenshot in Windows 10

Windows 10 offers eight ways to take a screenshot. Which do you prefer? 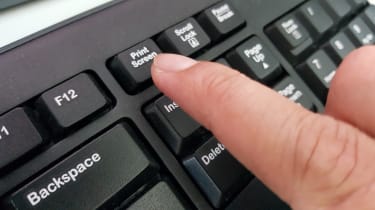 When you run into an error on your machine and need to show it to the help desk or just need to grab an image from your screen quickly, Windows 10’s screenshot feature can be a lifesaver. In its most basic sense, the screenshot function snaps a picture of your screen that you can later edit and share.

Over the years, this function has become more robust, and Windows 10 has a whopping eight ways to screenshot. Why so many? Because they each have slightly different functions, including snapping only your active window or the area you highlight.

Ultimately, these multiple screenshot functions in Windows 10 help save on editing time, leaving you to be more productive.

Here are all the ways to screenshot in Windows 10.

Using the standalone Print Screen button on its own will not actually print the screen. Instead, it’ll create a copy of your entire screen across all monitors. You then must paste that copy into Paint, an email, a chatbox or wherever else you may need.

If you prefer to trim down the screenshot to a smaller area without having to paste it into Paint first, you can set the Snip & Sketch tool to activate automatically when you press the Print Screen button. To do so, search “Settings” then go to “Ease of Access” and “Keyboard.”

Scroll down until you see “Print Screen shortcut,” and toggle “Use the PrtScn button to open screen snipping” option to “On.” With this activated, pressing the Print Screen button on your computer will open the Snip & Sketch tool, and you select the area you want to screenshot.

From there, you can then mark up the image and save it to a new file or paste it elsewhere.

Using the Windows key and Print Screen shortcut, Windows 10 will take a screenshot across all your screens and automatically save it to the Screenshots folder.

When you use this shortcut, your screen will go dim for a fraction of a second, which alerts you the screenshot was successful. From there, it’ll save the screenshot to the Pictures > Screenshots folder.

When you combine the Windows Key, Shift and “S,” this will activate the Snip & Sketch feature mentioned above. Your screen will dim, and you can use Snip & Sketch as you normally would.

You can also perform a screenshot via the game bar, which you access by pressing Windows Key and “G.” In the game bar, you’ll see a camera icon in the top-left corner, press this to take a screenshot. Alternatively, you can press Windows key, Alt and Print Screen together with the game bar active.

This will snap a full-screen shot of whatever game you’re playing and save it in the Videos > Captures file.

Open the Snip & Sketch app by typing it in the Windows search bar. Once open, click “New.” The screen will darken, and you can choose the area you want to screenshot from the menu at the top of the screen. Snip & Sketch has four screenshot modes: rectangle, free-form, window or full-screen.

Once you’ve taken the screenshot, you can use Snip & Sketch’s various features to mark it up, including a marker, pen, highlighter and more.

The Snipping Tool is basically an older version of the Snip & Sketch tool.

Type “Snipping Tool” in the Windows 10 search bar and open it. Choose the type of screenshot you want from the “Mode” dropdown menu, including rectangle, free-form, window or full-screen. Select the area you want to do a screenshot of, then click “File” and “Save as” to save the screenshot.

If you own a Microsoft Surface running Windows 10, you can press the Windows logo and volume down key to take a screenshot of your entire screen. This automatically saves the screenshot in the Pictures > Screenshots folder.