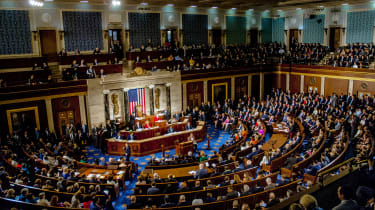 The U.S. Senate voted down an amendment to the Patriot Act on Wednesday. The amendment would have put tougher standards in place when it comes to government investigators collecting web search and browsing data of individuals in the U.S.

Proposed by Senator Ron Wyden of Oregon, a Democrat, and Senator Steve Daines of Montana, a Republican, the bipartisan amendment would have required that the Department of Justice show probable cause when seeking approval from the Foreign Intelligence Surveillance Court to collect data related to counterterrorism or counterintelligence investigations. Currently, the Patriot Act allows investigators to browse a bulk of Americans’ browsing data without a warrant.

Unfortunately, the amendment fell short of just one vote. To pass, the amendment required 60 votes in the Senate. Further complicating the matter are the four senators who chose to abstain from the vote. Those who abstained included Senators from both parties.

Republican Senator Lamar Alexander is in self-isolation after having a staffer test positive for the novel coronavirus. Republican Ben Sasse, and Democrats Patty Murray and Bernie Sanders also abstained from the vote.

While a spokesperson for Senator Murray told Politico that Murray wasn’t in Washington, D.C. at the time of the vote, spokespeople for Sasse and Sanders have yet to comment on why the senators failed to vote on the amendment.

While these senators abstaining from voting pushed along its fate was sealed by In total, 37 senators’ “Nay” votes. The “Nay” voters included 27 Republicans and 10 Democrats.

The amendment takes aim at Section 215 of the Patriot Act. The act was originally signed into law in response to the Sept. 11 terrorist attacks and granted the government permission to collect any “tangible thing” from a third-party business or organization, so long as the information was relevant to a national security inquiry.

As Sen. Wyden explained in his speech prior to the vote:

“Right now, the government can collect web browsing and internet search history without a warrant under Section 215 of the Patriot Act. Section 215 is the most controversial and dangerous provision of [the Foreign Intelligence Surveillance Act]. That’s because it is so vague and so broad. Under Section 215, the government can collect just about anything so long as it is relevant to an investigation. This can include the private records of innocent, law-abiding Americans. They don’t have to have done anything wrong. They don’t have to be suspected of anything. They don’t even have to have been in contact with anyone suspected of anything. Their personal information just has to be 'relevant.'”

While the amendment failed to secure enough votes, it’s only one of several proposed reforms, each seeking to add boundaries and structure to the government’s surveillance powers. At this time, the Senate is expected to vote on a final bill later this week.