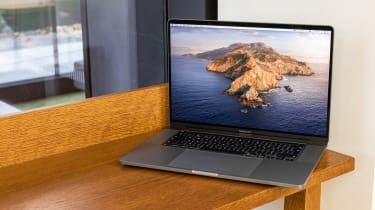 Update: Apple has officially announced that it's abandoning Intel in favour of custom ARM-based Mac processors.

The announcement, made during Apple's WWDC keynote, marks the first time in the 36-year history of the Mac that Apple will design the silicon powering the machines.

Apple said the first ARM-based Mac would ship by the end of 2020 and it's promising some major performance improvements. The company says its custom 'Apple Silicon' will equip Macs with "industry-leading" performance-per-watt, higher-performance GPUs and improved power efficiency, as well as open up technologies such as its Neural Engine to third-party developers.

The chips will also equip Macs with similar features to Windows 10 on ARM machines, including instant-on functionality and the potential for built-in 4G.

What's more, as all of Apple's devices will now use a common architecture, the transition to ARM will enable iOS and iPadOS apps to run natively on macOS for the first time.

“With its powerful features and industry-leading performance, Apple silicon will make the Mac stronger and more capable than ever," said Apple CEO Tim Cook. "I’ve never been more excited about the future of the Mac.”

The company demoed a number of apps working natively on Apple Silicon, including Microsoft Office, Adobe Photoshop and Lightroom, and Final Cut Pro.

Apple has also launched a Quick Start Programme for developers, which equips them with documentation, beta versions of macOS Big Sur and Xcode 12 and access to the Developer Transition Kit. This comprises a Mac Mini running Apple's A12Z Bionic SoC, 16GB RAM and a 512GB SSD.

Apple says most developers should be "able to easily create a single app that taps into the native power and performance of the new Macs with Apple silicon, while still supporting Intel-based Macs".

For third-party apps that haven't been rewritten for ARM, Apple is providing a back-up solution in the form of Rosetta 2, which will automatically translate existing apps at installation.

Apple’s first ARM-powered devices will be a 13in MacBook Pro and an all-new iMac, according to analyst Ming-Chi Kuo.

Apple is expected to announce its transition from Intel to ARM processors during its WWDC keynote later today. While the company isn’t expected to unveil any new hardware during the conference, a new research note from Kuo claims that the company’s first ARM-based devices will be a 13in MacBook Pro and an iMac with a redesigned form factor.

Set to arrive in Q4 2020 or Q1 2012, the MacBook Pro is expected to look similar to the current Intel-powered model, but it should offer some decent gains in the performance department. In the note, seen by MacRumors, Kuo claims ARM machines will outperform their Intel predecessors by 50 to 100%.

The ARM-based iMac will arrive with an “all-new form factor and a 24in display”, according to Kuo. Apple will launch a refresh of existing Intel ‌iMac‌ in the third quarter before launching the ‌ARM-based ‌iMac in the first quarter of 2021.

Kuo says that all new Mac models will be equipped with custom processors starting in 2021, adding that it will take 12 to 18 months for Apple to transition to an all-ARM lineup.

9/6/20: Apple might announce its first ARM-based Mac processors at WWDC

Apple will announce plans to stop using Intel processors in its MacBooks at WWDC later this month, according to reports.

The company will use its upcoming virtual-only developer conference to announce that it's shifting to its own ARM-based CPUs, people familiar with the plans told Bloomberg on Tuesday.

However, Apple won't be showing off any new Mac hardware at WWDC. Instead, the announcement will give macOS developers time to adjust their apps before the first Macs with the new processors make their debut in 2021.

Eventually, Apple plans to transition its entire lineup of Mac notebooks and desktops to the custom-designed processors, the report notes.

Mac use in small- to medium-sized enterprises

A comprehensive study of mac-trends within SMEs

The announcement will mark the first time in the 36-year history of the Mac that Apple has designed the processors powering the machines itself. The company has been using Intel CPUs since January 2006, but apparently now plans to ditch the chipmaker due to a slowdown in annual processor performance gains.

While this is bad news for Intel, with Apple accounting for approximately 5% of the chipmaker's revenues, it's good news for MacBook users.

The custom chips, which will reportedly be built on TSMC's 5nm manufacturing process, have shown "sizable improvements" over Intel's processors, particularly in graphics and artificial intelligence (AI) performance, according to Bloomberg.

The ARM-based CPUs are also more power efficient, which should make for battery life enhancements and thinner and lighter frames.

Apple is said to be developing three custom Mac processors, the first of which will be a 12-core chip based on the A14 SoC that's set to power the iPhone 12. It reportedly features a CPU, a GPU and a Neural Engine for machine learning and AI.

Apple's virtual conference kicks off on 22 June and will be available to watch online. During its keynote, the company is also expected to announce the next iterations of its iOS, iPadOS and macOS software.