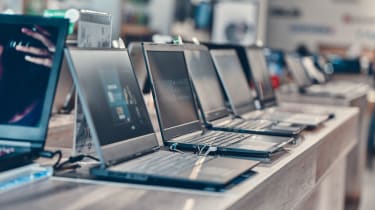 The worldwide PC market saw a third quarter of successive growth in 2020, with Q4 shipments up 25% year-on-year after a record 90.3 million units were sold.

Strong demand throughout the autumn saw Q4 sales jump 13% from the previous quarter, according to Canalys data. Those figures were all the more impressive because Q3 was also a very strong quarter.

For 2020 as a whole, PC shipments increased 11%, the highest growth recorded for a decade, despite the pandemic shutting down supply chains for the first three months of the year.

This growth was "singlehandedly" driven by notebooks and mobile workstations, according to Canalys, with shipments of these devices increasing by 25% year-on-year with 235.1 million units shipped. Desktop and desktop workstation shipments fell by 22% over the same period, and tablets were not included in the data.

Breaking the shipments down by brand revealed that Lenovo was the top supplier in Q4, with a record-breaking 23.1 million units shipped. The firm saw a 29% growth year-on-year which also means it was the number one for the entire year with a market share of 24.5%.

HP took second place with19.1 million units shipped in Q4 and 67.6 million for the year, while Dell ended the year in third with 27% growth in Q4, breaking the 15 million units mark for the first time in its history.

Your roadmap to cloud-based management essential to the modern enterprise

Apple and Acer ended the year in fourth and fifth place, respectively. In total, the top five vendors accounted for 78.5% of global PC shipments in 2020.

The simplest answer for the demand is remote working and learning and the need for fast, reliable and innovative laptops and notebooks. In meeting that demand, Canalys research director, Rushabh Doshi, said the industry "deserves all the success that has come its way".

"We would be in a very different position had it not been for the commitment of the PC industry, including the vendors, the supply chain and the distribution channel, to make sure that every bit of market demand was met," Doshi said. "The digital transformation the world has undertaken over the past year is unparalleled, and PCs were at the heart of this change.

"As the world readies itself to get vaccinated and overcome the COVID-19 virus, it is important to remember that PCs have played a vital role at every stage of this fight, from understanding the virus and synthesising the vaccine, to social monitoring and vaccine roll out. It is going to be extremely difficult to write off the PC as some of us did a few years ago. PCs are here to stay."