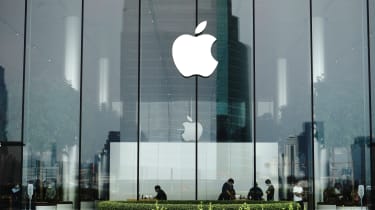 Apple has been awarded a patent for “synthetic group selfies.” Using this technique, you could get a picture together without actually standing next to each other.

The patent was first spotted by the website Patently Apple, which obviously stays on top of such things. It was one of nearly 60 new patents granted to Apple that were just published by the US Patent and Trademark Office.

While this particular invention might be ideal for the era of social distancing, Apple certainly didn’t have that in mind when it first applied for the patent back in mid-2018.

Here’s how synthetic group selfies would work, according to the patent application: Someone using an Apple device could invite other people to take part in a group selfie. Everyone in the group would contribute individual photos of themselves. Apple’s software would merge those pictures into a single group image.

The software could use still photographs, stored video images or live streaming images. The software would process these images to remove parts of their backgrounds. That work could be distributed among multiple devices in the group to reduce the workload on a single device.

It’s not clear from the patent application whether this group selfie software will eventually be available on iPhones, iPads or both.

It’s also not clear whether “synthetic group selfies” will ever make it to consumer devices. After all, this is just a patent, and that doesn’t necessarily mean that Apple will ever develop a finished product.