The follow-up to one of the best budget SSDs gets even higher top speeds, while keeping pricing low 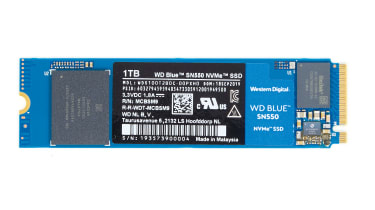 In terms of making improvements on previous generations, there’s not much that can top how the Blue SN500 switched WD’s entry-level SSD range from SATA to NVMe.

Even so, its direct successor – the Blue SN550 – has been positively showered with upgrades. There’s a new 1TB capacity option, joining the 250GB and 500GB drives, and its TLC NAND memory is 96-layer; a more modern, denser alternative to the Blue SN500’s 64-layer NAND.

And, although the move to 96-layer memory is more about swelling capacity and efficient production than it is about enhancing performance, the SN550 promises to be faster too. A lot faster: the maximum read speed is quoted at 2,400MB/s, up from the SN500’s 1,700MB/s. The 1TB model, which is what we’ve got here for testing, also claims a substantially quicker 1,950MB/s write speed than the 1,450MB/s of the 500GB SN500.

The best part is that all these improvements haven’t impacted the Blue series’ characteristic cheapness. The 1TB model works out at a pittance of 10p per gigabyte – about as cheap as NVMe drives of this size can come, at least from a brand with WD’s clout. The 500GB model is also a very wallet-friendly 13p per gigabyte, and although the 250GB is the worst value of the three at 16.4p gigabyte, that’s normal for smaller capacities. Besides, the £41 outlay is still relatively small.

However, there’s still a very good reason to spend on the larger capacity: that 1,950MB/s write speed is exclusive to the 1TB model. While all three varieties share a read speed, write speed is down to 1,750MB/s on the 500GB model and is just 950MB/s on the 250GB model. Again, it’s not remotely rare for lower-capacity drives to be a bit slower than their bigger brothers, but losing well over half the maximum write speed is tough to swallow at any price.

Of course, these are all just WD’s own figures, so it’s time to see how at least the 1TB SN550 stands up to our benchmarks. CrystalDiskMark’s sequential tests, which usually show a storage drive at its nimblest, give solid backing to the official figures: in fact, by recording a 2,408MB/s read speed and a 1,976MB/s write speed, the SN550 very slightly exceeded its quoted performance. 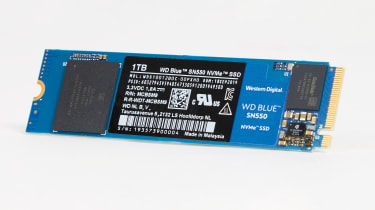 In the 4K random test, however, it only managed a 279MB/s read speed and a 190MB/s write speed. Not only are both those results less than half of what the Kingston A2000 - an only modestly more expensive SSD - achieved, they’re also a little lower than those of the last-gen SN500. We’re not entirely sure why, though it may be because the more densely packed 96-layer NAND takes a bit longer to sort through than 64-layer, even if only in very specific conditions.

Fortunately for the SN550, it showed some good performance improvements in our own file transfer tests, which are designed to more accurately reflect real-life performance than the synthetic CrystalDiskMark benchmarks. In the huge file test, for instance, it averaged a read speed of 1,195MB/s and a write speed of 1,127MB/s – both up on the SN500’s respective 1063MB/s and 952MB/s, for no extra cost.

It repeated this feat in the more demanding large files test, ultimately managing an average 1,110MB/s read speed and an average write speed of 1,061MB/s. Budget SSDs often fail to slip past the 1,000MB/s mark in this particular test – as both the SN500 and the similarly cheap Crucial P1 did – but the SN550 only dropped slightly below its huge file test results.

It was only in the small file test where the newer drive faltered, averaging a decent but still less impressive 456MB/s read speed and a 377MB/s write speed. The latter is only level with the SN500’s showing in the same test, and its read speed is actually lower: the SN500 averaged 475MB/s.

Between this and the 4K random test, we can conclude that the SN550 is – bizarrely – much faster than the SN500 in simpler, less taxing file transfers but equal to or slower than it in the most difficult ones. However, when it comes down to a choice between the two, we still think the SN550 is the better buy. Most of the time it will be the faster SSD, and by not insignificant margins.

Also, considering this is a budget SSD designed for relatively basic PCs, it’s probably going to mainly face relatively simple tasks. Were this a high-level, workstation-grade drive like the Samsung 970 Pro, there would be much greater cause for concern.

As such, it’s definitely worth considering the Blue SN550 if you’re building a simple PC or wanting to upgrade from your SATA storage on the cheap. We still recommend going for the faster 1TB or 500GB models, but it’s a recommendation all the same.