Google unveils use of accelerometers as mini seismometers 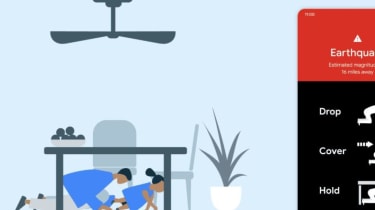 California has a network of seismometers that lets scientists spot an incoming earthquake - but not everywhere can roll out such infrastructure.

To help, Google is turning Android phones into a network of mini seismometers to give people in quake-prone areas faster and more accurate notifications.

Google started working with the US Geological Survey and California's Office of Emergency Services on Shake alert, which sends notifications to Android devices in the state.

"A few seconds of warning can make a difference in giving you time to drop, cover, and hold on before the shaking arrives," said Marc Stogaitis, principal software engineer at Android, in a blog post.

But those warnings make use of a network of more than 700 seismometers, which Stogaitis notes may not be feasible everywhere. "Earthquakes happen daily around the world, with hundreds of millions of people living in earthquake prone regions," he said.

"An early warning can help people prepare for shaking, but the public infrastructure to detect and alert everyone about an earthquake is costly to build and deploy."

To help, Google has announced the Android Earthquake Alerts System. "This means your Android phone can be a mini seismometer, joining millions of other Android phones out there to form the world’s largest earthquake detection network," he added.

The system makes use of the accelerometers in phones, which Stogaitis says can pick up the small signals that an earthquake is looming.

"If the phone detects something that it thinks may be an earthquake, it sends a signal to our earthquake detection server, along with a coarse location of where the shaking occurred," he said. "The server then combines information from many phones to figure out if an earthquake is happening."

All of the data is collected and processed via a Google algorithm to understand what's about to happen, including spotting the epicentre and predicting how large of an earthquake to expect.

If one is imminent, the aim is to eventually send push notifications to those impacted, though Google admits that those closest to the epicentre are unlikely to warned before the rumbling begins; instead, the system will benefit those who are a bit further out.