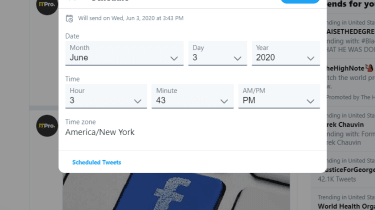 Twitter has officially launched a feature that allows its users to save a tweet as a draft or schedule it ahead of time.

Last November, Twitter revealed it was testing a feature that would allow users to schedule tweets. At the time, the feature was available to only a select number of Twitter users. Those who didn’t gain access to the long-sought-after feature were directed to use TweetDeck in the meantime. As of yesterday, though, it appears all Twitter users can take advantage of this feature.

If you have yet to check out how this new feature works, check out this video from Twitter Support.

Not quite ready to send that Tweet? Now on https://t.co/fuPJa36kt0 you can save it as a draft or schedule it to send at a specific time –– all from the Tweet composer! pic.twitter.com/d89ESgVZal

As you can see in the video, scheduling a tweet is a simple process. It’s as easy as opening a new tweet, dropping in your content and using the calendar on the lower left-hand side of the tweet box to schedule it.

Now that Twitter has finally enabled its users to save drafts and schedule tweets ahead of time, we can only hope it treats us to additional wishlist items, including editable tweets, soon. With no such news on the horizon, though, it looks like we’ll have to wait for that wish to be fulfilled.