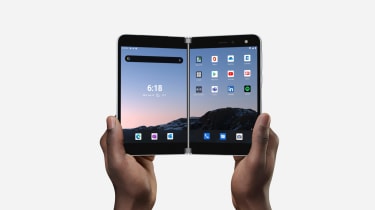 Microsoft has finally announced the arrival date of its Surface Duo, confirming that the dual-screen Android phone will ship 10 September with pre-orders beginning today.

First unveiled last October, the Surface Duo features two displays linked by a 360-degree hinge, allowing the device to be used folded or opened as two 5.6in displays, or as a larger 8.1in screen.

It'll run Android 10 and Microsoft says it supports all Android apps, with some optimised for the dual screen. For example, with the Amazon Kindle app, a book will show across both displays similar to a paper book.

That allows the Surface Duo to support multitasking in Windows tools as well as Android apps, such as joining a Teams meeting on one display while your PowerPoint slides are open in another, said Panos Panay, chief product officer for Windows and Devices, in a blog post.

"We have worked to optimize apps including Office, Outlook, Teams, Edge, OneNote, OneDrive, Microsoft To Do and more for two screens, while continuing to extend Windows to add more value to people also using Android phones," he added.

Since the launch, few specs have been revealed. The Surface Duo will run last year's Snapdragon 855 processor with support for 4G but not 5G. The AMOLED displays are each 401ppi and protected with Gorilla Glass. Unfolded, the Surface Duo will be 4.8mm thick; it weighs 250 grams. There's also a single 11-megapixel camera, fingerprint scanner and single USB-C port.

And, while there's a battery on each side, that adds up to 3577mAh of capacity - less than Samsung's Galaxy Fold, notes The Verge - though Microsoft is promising all-day battery life and up to 15.5 hours of video playback.

Microsoft will include a bumper cover in the box, and the Surface Duo supports a stylus, though one isn't included.

Panay said the new device may not be for everyone, but predicted it could prove as useful as tablets to business users. "As with any new category or form factor, people will find it fits into their lives and workflows in different ways," he wrote.

"When we launched Surface Pro, not everyone believed a tablet could truly replace their laptop, until it did."

Preorders for the Surface Duo begin today, and the device is available from Best Buy, AT&T and the Microsoft Store, although the device will be carrier-locked to AT&T. As yet, it's only available in the US, with a wider release expected soon.

While the Surface Duo is officially on its way, we're yet to get a release date for the Surface Neo, the dual-screen laptop-cum-tablet that will run Windows 10X. Reports suggest the Neo may not arrive until next year.