Smartphone's launch could come as soon as May 15 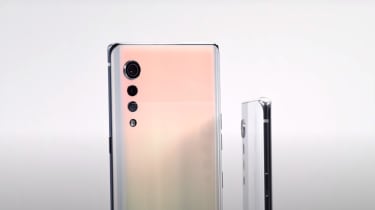 In a short trailer released over the weekend, LG gave consumers an inside look at its upcoming mobile device, the LG Velvet.

The incoming flagship catches the eye, and it all starts with a raindrop, which is just one of our favorite things about the replacement for the outgoing G-Series.

Unveiling the smartphone's descending raindrop camera and showing off the phone’s ergonomic curves and remarkably sleek edges, there’s no denying this sneak peek has us counting down the days until the LG Velvet hits stores.

While LG has already announced some of the Velvet’s key design details, including the raindrop camera and ergonomic shape, this new trailer gives us a clearer idea of what to expect this device to look like.

Beyond its sleek curves and cascading camera lenses, the trailer reveals the LG Velvet’s 3.5mm audio jack on the bottom and four color options: black, white, green, or a pink-orange hybrid.

The teaser goes on to confirm the LG Velvet will feature a Snapdragon 5G 765 processor. While this processor is a step down from Qualcomm’s Snapdragon 865 flagship processor, this new Snapdragon processor supports 5G connectivity.

There’s no official word on when LG plans to fully unveil the Velvet, but a report from Korean news portal Naver suggests it could happen on May 15, 2020. At the very least, this teaser indicates its launch can’t be too far off.