You shouldn’t expect top performance, but this dinky mesh system eradicates notspots for a great price 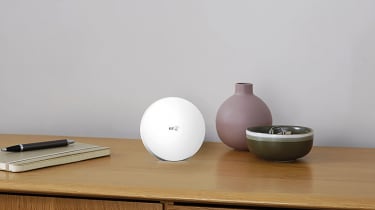 Thanks to its solid performance and very reasonable price, BT’s Whole Home Wi-Fi system has been one of our favourite mesh Wi-FI extenders since its debut back in 2017. Now, the telecoms giant has come out with an even cheaper option, shrinking down its distinctive discs and scaling back the internals. Although this means performance is slower, it still makes a great way to extend the reach of your home network on the cheap.

The Mini Whole Home Wi-Fi kit is an 802.11ac mesh system, just like the regular Whole Home kit. As with the original model – but unlike most other mesh platforms – it works as an extender for your existing router, rather than seeking to replace it.

As the name suggests, however, the Mini uses smaller discs that are easier to locate discreetly about your home and the hardware inside them has been pared back a little too. The full-sized units are rated for connection speeds of up to 800Mbits/sec on the legacy 2.4GHz band and 1,733Mbits/sec over 5GHz connections, while the Mini claims only 300Mbits/sec and 866Mbits/sec.

Those are still fair speeds, and the Mini boasts 4x4 MIMO too. But, since this is only a dual-band platform, your devices can’t make full use of the available wireless bandwidth, as the 5GHz channel also has to carry all the backhaul traffic between nodes.

The Mini Whole Home Wi-Fi units are of a simple circular design, measuring 12cm across (almost exactly the same size as a CD). They stand upright on an integrated plastic foot that sticks out of the back and, when the unit’s powered on, a single LED glows through the faceplate in various colours to indicate activity or connection problems. 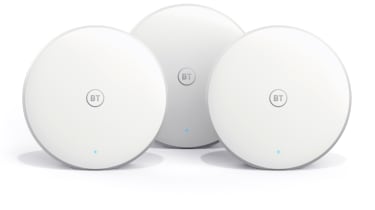 At the rear, there’s a power socket, a Gigabit Ethernet connector, a WPS button for connecting devices without having to enter a password and a pinhole for resetting the firmware. It’s a nicely functional design and, while the single Ethernet socket may seem restrictive, remember that this is a wireless extender system: you can connect additional wired clients directly to your existing router.

BT’s quick-start guide encourages you to set up the system via the free app for Android or iOS, and this is made easy thanks to a QR code on the back of each node. Alternatively, you can open a web browser and log into the Mini Whole Home Wi-Fi system directly, using the preconfigured credentials inscribed on the back of each unit.

Either way, there’s little to configure. Once the three units are plugged in, they automatically connect to each other and start broadcasting a wireless mesh that connects back to your main network. From the Wireless Settings page, you can then change the SSID and WPA2 passphrase to whatever you desire (a set of blank stickers is thoughtfully provided for you to write these on and affix directly over the pre-printed information). You can also tweak the radio channels and disable WPS if you’re concerned about unauthorised visitors connecting to your home network, although sadly there’s no password-protected soft-button option.

Other features include an optional guest network, which grants internet access while keeping users isolated from your own clients. While you can’t split up the 2.4GHz and 5GHz bands into separate networks, you can enable or disable band-steering on a per-device basis. You can manually pause the internet for all connected clients too, although there are no proper parental controls: that sort of thing is left for your router or broadband provider to handle.

The original Whole Home Wi-Fi outperforms most dual-band competitors, largely because its ultrafast 1,733Mbits/sec 5GHz radio provides enough bandwidth to handle both client and backhaul traffic at decent speeds. As we’ve mentioned, however, the Mini’s transceiver is only half as fast and, while BT doesn’t publish the full internal specification, it’s a good bet that the antennae are smaller too. 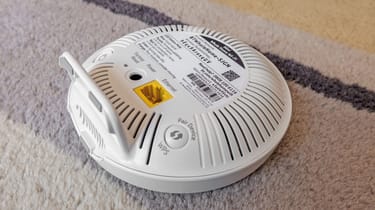 To see how these changes affect performance, we tested the BT Mini Whole Home Wi-Fi in our usual way, by setting up the primary node in our main room, situating the other two nodes in adjacent rooms, and walking around with a Microsoft Surface Laptop measuring the average upload and download speed to a NAS appliance connected to the main router by Ethernet.

The results (see the table below) were hardly a big surprise: for the most part, the Mini performed at just under half the speed of the regular BT Whole Home system. That puts it decidedly towards the low end of the mesh market as a whole; we’ve included scores from Netgear’s dual-band Orbi and the tri-band Asus ZenWiFi to illustrate what a premium 802.11ac mesh is capable of.

Even so, the Mini delivered a stable connection everywhere in our premises, and proved convincingly faster than the Tenda Nova MW3. Indeed, its throughput was still good enough to allow us to sit several rooms away and stream 4K videos from YouTube and Netflix without a glitch or stutter. If you’re focused on everyday internet duties you probably won’t ever notice the difference between this and a much more expensive mesh setup. 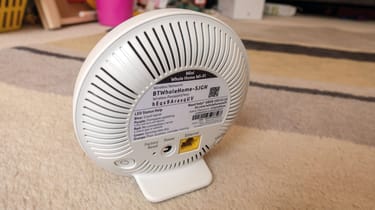 The BT Mini Whole Home Wi-Fi system currently costs only £75 for a three-node pack. That’s absurdly cheap for a bona fide mesh setup: hitherto, the only such system we’ve seen for under £100 has been the Tenda Nova MW3. If you’re willing to pay a bit more, a twin-pack of BT’s regular Whole Home Wi-Fi discs can be had for £125, while the Orbi and ZenWiFi push prices to around £200.

Unlike its non-BT rivals, the Mini Whole Home Wi-Fi isn’t a replacement for an outdated router, nor is it a turbocharger for your home network. That means, if you’re looking to fling huge data files around at maximum speed, this isn’t the extender for you.

If you’re merely seeking a localised signal boost, however, then the Mini Whole Home Wi-Fi could be just the ticket. The three-node configuration makes it more flexible than a regular wireless repeater, not to mention more manageable and expandable. And while it won’t win any awards for performance, it’s more than fast enough to extend email, web browsing, casual gaming and video streaming into the farthest reaches of your premises.

If that’s all you’re looking for then there’s really no need to spend more – the BT Mini Whole Home Wi-Fi kit will do the job at a fantastic price.