Top 15 tech companies to work for in the US 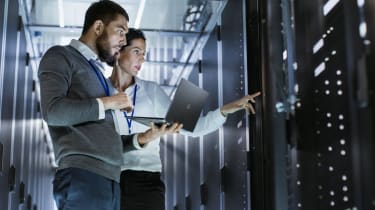 The tech industry often makes up the bulk of the best jobs in the US, but what about the great tech companies offering these jobs?

What makes a tech company a good one to work for? In some cases, it's high average salaries or high employee-satisfaction ratings that pushes them to the top. In other cases, it's the wide range of roles they offer, which allows you to move up the ladder within the same company.

What follows are the top-15 tech companies to work for in the US. First, let's have a look at how we came up with the numbers that back up their top-dog statuses.

There are many variables to account for when determining the best tech companies to work for, and each holds different weight for every job seeker. To streamline the process, we looked at some of the most significant factors job seekers consider when looking for a new gig.

Even though it's not always the most important factor, most job seekers are at least somewhat concerned about their future pay. So, using data from Payscale.com, we found the average salary of each tech company we imported from Indeed and Glassdoor's lists. Because salaries range greatly across each company, this is not always a good indicator of your future salary. This does, however, show us each company's salary trends.

If you've touched a computer, there's a good chance your data has passed through Cisco hardware or software. Cisco launched back in 1984 on the Stanford University campus and exploded into a multibillion-dollar company over the years.

Its expansion and firm grip on the enterprise hardware and software markets have made it a desirable tech company to work for. It lands at No. 15 on our list thanks to its relatively consistent numbers in all three variables.

Like Cisco, if you've done any work on a computer, there is a good chance you've worked with an Intel component, as its processors hold a 67.2% market share as of the first quarter of 2020.

With a stranglehold on the processor marketplace, it's no surprise Intel made it to No. 14 on our top tech companies list.

Intuit has long offered innovative financial software for individuals and businesses, including TurboTax, Quickbooks and Mint. Beyond this staple software, Intuit also offers a wide range of other business software to help companies meet their financial goals.

With so many offerings in the world of corporate and personal finance, it draws a lot of attention from job seekers and has earned the No. 13 spot on our list of the top tech companies to work for.

Dell Technologies has its hands on numerous sides of the technology game, as it not only produces computers for personal and business use, but it also offers a wide range of enterprise network solutions. This wide digital net Dell Technologies casts reels in the No. 12 spot in our list of top tech companies to work for.

Dell Technologies' best attribute for job seekers is its number of available positions, as Glassdoor lists 4,900 open jobs at the time of this writing. That places No. 3 on our list. Dragging it down a bit is its 4.15 rating by employees and $95,271 average salary, which both rank last on our list.

Adobe's products, including Photoshop and Acrobat,  have become staples in their software verticals. In fact, Photoshop has gone from a trademarked name to a colloquial verb for any edited image. It's this massive popularity of its staple products and useful niche products that have made it one of the most desirable tech companies to work for.

Every company that cares about employee experience has used SurveyMonkey to create anonymous employee surveys. But employers are far from the only folks using SurveyMonkey, making it a stable and desirable tech company to work for.

SurveyMonkey crushed all but one tech company on our list with its $134,743 average salary. It slipped to No. 10 due to its 4.25 average employee rating on Glassdoor and Indeed, which was part of a  two-way tie at No. 4 on our list. It also had just 86 available jobs at the time of this writing, which was ranked dead last on our list.

According to enterprise application software powerhouse SAP, "77% of the world's transaction revenue touches" one of its systems. This broad reach has earned it a shared No. 10 slot on our list of the best tech companies to work for.

With a whopping 3,300 open positions at the time of this writing, there is plenty of movement for job seekers at virtually any career level. Its No. 3 ranked employee rating of 4.3 of 5 points on Glassdoor and Indeed helps its overall rating on our list, but its $99,344 average salary ranks only 13th on our list, dragging it down a bit.

Many job seekers see LinkedIn as just a job board, but it has quickly become a leader in the world of tech and is a hot option for tech professionals looking to make a career move.

LinkedIn is locked in a two-way tie at No. 9 on our list of top tech companies to work for thanks to its incredible first-place 4.4 employee-satisfaction rating and fifth-ranked $122,793 average yearly salary. Dragging it down to No. 11 are its 235 open positions at the time of this writing, which is No. 14 among the other top tech companies on our list.

The second member of the two-way tie at No. 9 on our list of top tech companies to work for is Salesforce. It earned its spot as a force in tech by offering a customer relationship management solution that can fit virtually any business' needs. And with a significant need for tech workers to build, secure and improve this CRM, Salesforce must offer superior employee experience to keep the wheels moving.

NVIDIA may not be a household name to the average computer user, but gamers and those in the tech industry were introduced to it as a leader in computer graphics. Today, it is still a leader in graphics, but it also has worked its way into robotics and self-driving cars.

Its wide reach in the world of tech has led to it becoming one of the best tech companies to work for and helped it place No. 6 on our list. NVIDIA tops all other tech companies with its $138,743 average yearly salary and is no slouch with its third-ranked 4.3 of 5 employee rating. The only slipping point is its 1,200 open positions, which sits at No. 12 on our list.

There is more to it being a top-notch workplace than just a name and status. Facebook also ranks in the top 10 in the critical variables job seekers consider. Its average employee rating of 4.3 rings in at No. 3 on our list, and its 3,100 open positions is a healthy No. 6. Finally, Facebook's average yearly salary of $119,992 checks in at No. 6 among the top tech companies listed here.

From cloud storage to virtualization and everything in between, VMware offers tons of business IT solutions to solve almost any problem. This robust lineup of solutions makes it an in-demand company for job seekers in the tech industry.

VMware also hits the mark in terms of numbers with an average yearly salary of $128,081, which ranks No. 3 among tech companies listed here. VMware also boasts a third-ranked 4.25 employee rating and ninth-ranked 1,800 available positions at the time of this writing. This adds up to it a No. 5 overall ranking, tying it with Facebook.

It's on your computer, in your home, on your phone and even in your car: it's Google. What started innocently enough as a search engine has spread like wildfire to touch nearly every aspect of tech and life in general. In the process, it has also become one of the hottest tech companies to work for thanks to its incredible campus and the status that comes with saying you work for Google.

On a more objective side, Google rings in at No. 3 on our list thanks to its 4.4 average employee rating and whopping 4,100 open positions at the time of this writing, which ranks fourth. The only area where Google stumbles is its $115,126 average salary, which comes in at No. 9.

No list of top tech companies can be complete without Microsoft prying its way in somehow. Ranking No. 2 on our list is the company best known for the Windows operating system. Windows is more than just an OS these days, as it's also responsible for countless other software and hardware, including the powerful Surface Pro.

Its broad footprint on the world of tech has led to it becoming one of the hottest companies to work for. The numbers also give good reason to join team Microsoft, as it has an eye-popping 13,100 open positions, which ranks No. 1 by a wide margin. It also boasts a third-ranked 4.3 of 5 employee rating and a seventh-ranked $118,869 average salary.

Wherever Microsoft is, Apple isn't far away. This also rings true in terms of being a desirable employer, as it checks in at No. 1 on our list of top tech companies to work for. Apple offers countless software and hardware solutions for individuals and businesses in addition to its wildly popular smartphones, tablets and iPod MP3 players.

This colossal spread of technological offerings is enough to get any tech worker excited, and the numbers back up its desirability as an employer.

It checks in at No. 2 on our list for open positions with 7,000, giving any worker plenty of vertical and horizontal movement. It also isn't shabby with a 4.25 employee rating and an average yearly salary of $123,256, which both rank fourth among companies on this list.

Many job seekers care only about how employees feel about each company, and three companies that failed to make our list stood at the top of the employee-rating list.

Hubspot stood out as the No. 1 ranked company in employee happiness with an average rating of 4.55 and a first-place finish in Glassdoor's "Best Places to Work 2020" list. Ringing in at No. 2 in employee rating was Bain & Company at 4.45. The No. 3 slot belonged to Ultimate Software at 4.4.

All three companies fell out of our top-15 list due to relatively low salaries and few open positions.