STEM skills still lagging behind demand, but initiatives are helping 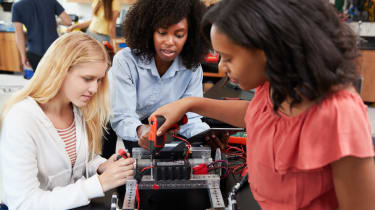 For years, the technology industry has been lamenting the lack of science, technology, engineering and mathematics (STEM) skills. Companies complained they were in perpetual short supply of suitable candidates for tech jobs as commentators warned of dire economic consequences.

The tech industry responded with a slew of coding camps to inspire schoolkids or mint fresh tech workers from adults who were just skilled enough to grasp the base concepts and hone their talents on the job. As we enter the third decade of the millennium, have these measures worked?

The situation is still dire, according to one coding camp organizer. Melissa Sariffodeen, chief executive officer of Canada Learning Code, a nonprofit that organizes coding workshops to help draw people into coding. Unfortunately, as we introduce more initiatives to foster tech skills, the need for them continues spiking.

"There continues to be high demand and a shortage of skilled digital talent in Canada as almost every company has become a technology company in some way," says Sariffodeen. This notion that all industries are now digital to some degree was a key part of the Canadian federal government's Economic Strategy Table for Digital Industries in 2018.

More broadly, a global survey by Harvey Nash and KPMG last year found an all-time-high 67% of companies faced a shortage of tech skills.

Over at EngineeringUK, a nonprofit organization encouraging engineering and technology, analysis shows strong demand for engineering roles. Information and communications roles make up 29% of engineering jobs in the U.K., according to spokesperson Tamzin Caffrey. Open vacancies in engineering grew 14% this year, she explains, adding, "we estimate there to be a shortfall of between 37,000 and 59,000 in meeting the annual demand for core engineering roles requiring level 3+ skills."

What's causing the shortfall? "The top drivers of the skills gap reported by employers include strong competition for skilled candidates, a shortage of applicants with appropriate qualifications and a lack of awareness among young people of the educational routes into engineering occupations," she says.

The effect on business

The effects of the skills shortage on business are direct and expensive. STEM Learning, which provides STEM education and career support in the U.K., estimates the shortfall costs businesses $1.76 billion per year in recruitment, temporary staffing, inflated salaries and additional training costs.

Various experts point to a gender imbalance as a contributing factor to the lack of STEM skills in the marketplace. Nimmi Patel, policy manager for skills and diversity at technology industry group techUK, repeats an oft-heard refrain: We need more women in tech.

"Although women represent 47% of the whole U.K. workforce, they only make up 17% when you look at the technology workforce," she says.

According to Patel, the imbalance begins early on, driven largely by conditioning that begins in childhood.

"Careers advice at school which perpetuates the STEM stereotype (of the industry only being for boys) means that fewer pupils, especially girls, are choosing to pursue STEM," she explains. "This affects the pipeline of talent coming into the sector."

Nevertheless, things are changing. The U. K. government has folded computing into the national curriculum as a statutory subject at all four states in education. In answers to Parliamentary questions, government officials also said they had upped spending on mathematics, digital, and technical education.

While the government stokes the pipeline in the public education system, the private sector is also responding with initiatives of its own. One example is Cisco, which has run its Networking Academy since 1997 to help spark an interest in STEM skills among adults and youth alike, explains Kathryn Baddeley, the networking and cybersecurity giant's head of CSR in the U.K. and Ireland.

The Networking Academy has an introductory cybersecurity skills course that teaches people the basics of this topic. At 15 hours, it may do little more than whet the appetite, but that's just fine, says Baddeley.

"If you view life as just a traditional, educational, straight line where everyone doing cyber is going to have done some at university, that isn't going to cut it," she says. " We need a much broader talent pool than that."

Instead, she sees the Network Academy as a top-of-funnel mechanism to pique peoples' interest. Those who find the material stimulating might consider a career in cybersecurity or a related field, she explains. There are paths to help people get industry certifications, such as their CCNA, that’ll get them on a technical career track.

A big part of creating new tech skills involves tapping into underused talent pools among adults and youths. To this end, Cisco is also finding success in recruiting neurodiverse youth into its work experience program. Of the 14- to 16-year-olds who come through its doors, 6% have conditions like autism spectrum disorder (ASD) and dyslexia, Baddeley explains.

In many cases, the characteristics of neurodiverse students map well to the kinds of jobs they'd be called upon to perform in tech. "We are as a country trying to encourage youth to see it as a place where those skills might be used, because they are so focused and so driven," she says.

Like other tech companies, Cisco draws on other communities to help prime the talent pool. One example is the veterans community. People coming out of the forces are often prime candidates for tech careers, Baddeley adds. "People coming out of the Royal Signals are an obvious set. They have the skills we need directly," she says.

As we continue the struggle to fill the skills gap, the potential talent pool isn't the only area where we should broaden our view, concludes Patel; we must think differently about what we consider part of the applicable STEM skill set.

"It is very clear that this is not just tech skills such as maths and coding. Tech developers agree that social and creative skills and critical thinking will be needed as well – so the humanities will be as important as the sciences in our schools," she concludes. "We need to teach the core skills required for children to flourish in the modern world, including critical thinking, verbal reasoning and creativity."