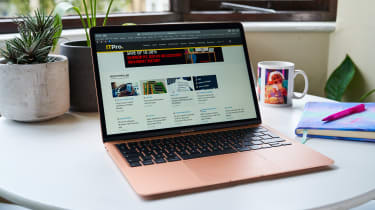 The new MacBook Air arrives as the third updated model in Apple’s fan-favourite laptop line in as many years.

While the 2018 MacBook Air, along with the 2019 model that followed, introduced a handful of nice-to-have features such as the addition of a Retina display and Touch ID sensor, both were let down by their terrible keyboards, with Apple ditching the MacBook Air’s much-loved keys in favour of its “new and improved” butterfly mechanism. And we all know how that turned out.

With the 2020 MacBook Air, the bizarrely-flat and awkward-to-type-on butterfly keys have been binned, replaced instead by Apple’s new Magic Keyboard that, thankfully, is just as impressive as the company is claiming.

While this is undoubtedly one of the best things about the new MacBook Air, that’s not all this 2020 model has to offer.

The MacBook Air is no longer the thinnest and lightest 13in laptop around - the Samsung Galaxy Chromebook takes that crown with its skinny 0.99mm-thick chassis - but as its name suggests, it’s still backpack and laptop-on-knees friendly. The 2020 model measures in at 16.1mm thick, slightly chunkier than the 2019 model, and tips the scales at a perfectly portable 1.29kg.

There’s no major redesign to swoon over, but the MacBook Air boasts the usual premium build quality that we’ve come to love from Apple laptops, arriving as a sleek wedge of brushed aluminum that oozes high-end appeal. It’s available in Gold, Silver or Space Grey colour options; we’ve been using the former, and if we were allowed to leave the house, the rose-gold tint would definitely be turning heads down the local.

Open the lid and things are just as premium; the dark grey keyboard looks dramatic and crisp in contrast to the pale metal, and the (impressively powerful) speakers that flank it are subtle enough that they disappear into the chassis. The only major let-down design wise is the chunky bezels; we were hoping Apple would carry across the smaller edging introduced on the 16in MacBook Pro.

Here’s where things get exciting. The 2020 MacBook Air is the first in the lineup to boast Apple’s new scissor-switch keyboard mechanism, which arrives as a replacement for the butterfly keyboard that was not only uncomfortable to type on, but was prone to failing if it came into contact with dust.

Apple thinks it’s new keyboard design, which boasts 1mm of key travel and a pleasantly familiar inverted-”T” arrangement for the arrow keys, is so good that it’s called it the Magic Keyboard. While we’d usually scoff at Apple’s over-the-top marketing terms, we don’t think it’s far off in this instance; the new keys are a huge improvement over every iteration of Apple’s maligned butterfly keys, providing a comfortable, accurate, and impressively near-silent typing experience. Whereas we soon tired of typing on our 12in MacBook’s clicky and frustrating butterfly keys, we could type on the Magic Keyboard for days in comfort.

Another great thing about the MacBook Air’s keyboard is its function row of keys. While it seems crazy to be considering this a “feature”, we’re incredibly relieved Apple opted for a tactile row of buttons as opposed to the Touch Bar found on all of the models in the MacBook Pro lineup.

The Magic Keyboard also comes with a Touch ID sensor built into the power button. While we’d have rather seen Apple finally integrating Face ID into its laptop line, the teeny-tiny sensor means you no longer have to type in your password every time you leave your laptop for more than two minutes. It’s also handy for approving App Store and Apple Pay purchases.

Underneath the Magic Keyboard sits a generously-sized Force Touch trackpad that dwarfs that on our previous 12in MacBook. As long-time MacBook users we may be biased, but we think the trackpad delivers better responsiveness than any Windows laptop on the market, and we’re fans of Apple’s cleverly-implemented gesture controls that allow you to satisfyingly swipe your way around macOS.

As with most LCD panels, the MacBook Air’s screen can be difficult to see in bright sunlight, which isn’t ideal for working in our non-existent garden. Rather, the display performs at its best at nighttime thanks to Apple’s TrueTone technology. This sees the display shift to a cool blue tone as the sun starts to set, making it easier on the eyes when you’re 11 hours into an eight hour shift.

Though we’re fans of the MacBook Air’s display, we’re not so keen on the frankly-terrible 720p webcam that sits nestled above it, that just like the webcam found on the 2010 MacBook Air, produces sub-par, noisy images. It baffles us, particularly given the size of the bezels that remain on the MacBook Air, that Apple continues to stuff a sub-par camera into its webcams. This feature, which Apple is endlessly upgrading on its iPhones and iPads, has become ever-more important over recent months too, given the growing number of Hangouts calls, Facebook Messenger get-togethers and Zoom quizzes we’re all attending.

Audio is great, though, with the Dolby Atmos-capable stereo speakers that flank the keyboard proving to be some of the most powerful on a laptop of this size.

Under the hood, things are almost as exciting as that new keyboard. Apple has equipped its 2020 MacBook Air with Intel’s new 10th-generation processors ranging from the 1.1GHz dual-core Intel Core i3 to the 1.2GHz quad-core Intel Core i7.

The model we’ve been reviewing packs a 1.1GHz quad-core Intel Core i5 processor, which comes paired with 8GB of 3733MHz LPDDR4X memory as standard, but this can be configured up to 16GB at point of purchase - which we did.

As you’d expect, especially when you consider its £200 RAM add-on, the MacBook Air breezes through everyday tasks without a hitch; having multiple apps open no longer causes our MacBook to judder or freeze, though we do still experience seemingly unnecessary fan noise on occasion.

Though nippy, it’s by no means as powerful as the enthusiast-level MacBook Air, but with a single-core score of 1070 and multi-core score of 2,766 in Geekbench 5, it’s no slouch either, particularly compared to our 2017 MacBook which scored 761 and 1494 in the same tests.

In terms of storage, the laptop comes with a reasonable 256GB as standard, and for the first time on a MacBook Air, you can upgrade to a hefty 2TB. Though it packs a slightly slower SSD than the 2018 MacBook Air, in the BlackMagic Disk Speed Test, the 2020 model achieved a write speed of around 1326Mb/s, and read speeds of 1208Mb/s.

Unfortunately, the lacklustre port selection can’t be pimped. There are just three ports in total on this machine; two USB-C Thunderbolt 3 ports for charging and data transfer, and a lesser spotted headphone jack on the right edge. This isn’t ideal for those with elaborate work from home setups, nor those who rely on standard USB-A ports and SD card slots; we were forced to buy a £79 USB-C dongle in order to hook the machine up to our external HDMI display.

One area where the MacBook Air doesn’t live up to its promise is in the battery life department. It’s not terrible, but it’s certainly not as world-beating as advertised; Apple says all models of the 2020 Air will run for 11 hours of web activity and 12 hours of video playback. We found it was more like, er, six.

We’re by no means power users, either. Typically, we’ll have just Safari, Slack and WhatsApp open at once, but it doesn’t take much tab-switching or GIF-sending for the battery on the new MacBook to rapidly drain. This is disappointing for a laptop of this calibre, particularly when compared to its Windows competition; the Asus ZenBook Duo, which also utilises Intel’s 10th-generation CPUs, lasted more than 10 hours by comparison.

Battery life disappointment aside, it’s never been clearer as to why the MacBook Air remains Apple’s most popular laptop. The 2020 model is the one we’ve been longing for too, particularly in this newfound era of working from home where a comfortable keyboard, desk-to-sofa portability and a clear, crisp screen are at the top of our feature wish-list.

Let’s just pray this penchant for endless Zoom calls soon comes to an end, otherwise we’re going to be forced to buy a standalone webcam.