With Toshiba having finally divorced itself from the Dynabook brand, leaving Sharp as the new parent company, it’ll be interesting to see whether the sole manufacturer maintains Dynabook’s reputation as a reliable performer.

Dynabook’s first foray into the high-end enterprise market without the guiding hand of Toshiba, the Portégé X30F-14U, was deemed a promising success and built on the solid Tecra X40-F and Tecra X50-F units.

Sharp will be hoping to continue this momentum with the Portégé X30L-G, a premium 13.3in enterprise notebook that promises ultimate portability. It’s similar in design and purpose to the X30F-14U but is fitted with more powerful hardware, and also benefits from being among the lightest enterprise devices we’ve ever reviewed.

Weighing 870g, you’d be hard-pressed to find many devices lighter than the Dynabook Portégé X30L-G, but while its magnesium alloy chassis is impressively lightweight, it sadly feels a little plasticy, and rather on the cheap side. There’s no denying, however, the shell is sturdy and durable, having also been subject to rigorous MIL-STD-81G testing.

The Portégé X30L-G otherwise adheres to the common Dynabook design template, especially the softer edges, Onyx Blue coating, and gold stripes lining its hinges. These accents also round the power button, and underscore the touchpad. While largely inoffensive (barring the bizarre decision to embed the fingerprint scanner into the touchpad), this aesthetic pales against some of the more stylish enterprise devices on the market, such as the razor-sharp HP Spectre x360. 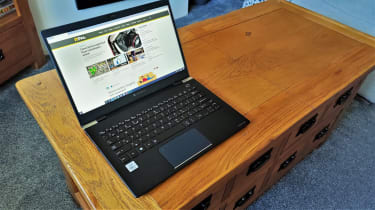 Although the Dynabook is extremely light, it’s also on the bulky side, measuring almost 18mm thick. While differences in the precise dimensions between rival machines are marginal, the extra bulk certainly adds to the Portégé X30L-G’s lack of aesthetic appeal. Nevertheless, given the device features a fantastic suite of connectivity options, including both Ethernet and HDMI ports, you can forgive its chunkier chassis. By way of comparison, the stylish HP Elite Dragonfly G1, which features an HDMI port but no Ethernet option, is a mere 16.1mm thick.

The Dynabook is fitted with a beaming 13.3in 1080p display that impresses both in terms of day-to-day usage, and when put through the paces of our display testing.

The 1,920 x 1,080 matte panel achieved a maximum brightness of 532cd/m2, rendering it one of the brightest enterprise notebooks we’ve tested, barring the latest Dell XPS 13. Non-reflective qualities also mean it’s one of the best options for users who enjoy working outside or in well-lit conditions. It’s an exceptionally good result, with the next brightest comparable device, the HP Elite Dragonfly G1, only hitting 462cd/m2.

Unfortunately, while the Portégé X30L-G’s colour accuracy is decent, registering 91.2% coverage of the sRGB colour gamut, this isn’t as high-scoring as its closest counterparts. Nevertheless, its accurate colour saturation combines with a decent contrast ratio of 1402.7:1 and strong 0.24cd/m2 black level to offer a fantastic panel for general usage. Users seeking a device for predominately image-based work, however, may wish to invest in an external monitor if they want to get closer to 100% colour accuracy.

Dynabook’s chiclet-style and raised-tile keyboard offers a mixed typing experience overall. Keystrokes are muted yet retain some force feedback, which proves well-balanced and satisfying while ensuring you likely won’t become a nuisance in a public space. Placement issues do begin to grate over time, however. The half-height Enter key, for example, is undersized, while tucked beneath it are minimised PgUp and PgDn buttons. 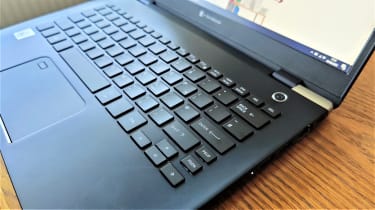 Rough to the touch, the trackpad is another source of frustration, chiefly due to the perplexing decision to ram the fingerprint scanner into its top-left-corner. This significantly reduces the area one can comfortably use, given that brushing over the scanner kills any cursor motion. Clicking can be awkward, too, because it’s so easy to catch the bar that underscores the touchpad before clicking the touchpad itself. An off-centre placement also means you’ll need to stretch your thumb a few extra inches to reach for Left-Click while typing.

The Dynabook is capable of truly blistering performance thanks to its hexa-core Intel i7-10710U processor, built on the Comet Lake architecture, with the 12-threaded CPU boasting a base frequency of 1.1Ghz and a maximum turbo of 4.7Ghz. This is in addition to 16GB DDR4 RAM, with a maximum capacity of 24GB, and a 1TB SSD.

With a stonking overall benchmark score of 104, we were surprised to find the Portégé X30L-G ranks as one of the current generation’s best-performing enterprise-focused devices. The latest Dell XPS 13, widely considered among the most desirable business notebooks, scored 90, by way of comparison. This was fitted with the Intel Core i7-1065G7 chip, while the 2020 HP Spectre x360, fitted with the same chip, scored 78. The only device from the recent crop to outperform the Dynabook is the Huawei MateBook 13, which registered 105.

While single-threaded performance in the Portégé X30L-G is relatively sluggish against comparable devices, outstanding video encoding and multi-threaded performance scores make the CPU a force to be reckoned with. This may also be due to an effective cooling system; the machine’s somewhat noisy fans kick into gear the moment it seems as if the device is about to break a sweat, but it’s a small price to pay for all that power.

The Dynabook Portégé X30L-G’s 43Whr battery ran for a decent 9hrs 19mins lifespan in our battery testing, although we’d have liked a little more juice given that it doesn't quite hit the 10 hour bar set by most comparable notebooks,

It’s not too long ago that a result beyond the ‘eight hour working day’ threshold would be considered good, although the standard for battery capacity has improved across the board in recent years. Nevertheless, the Portégé X30L-G is essentially tied with the Huawei Matebook 13, which lasted 9hrs 26mins, although the LG Gram 14, HP Elite Dragonfly and latest Dell XPS 13 all last between 10 and 11 hours.

Another area in which the Dynabook excels is in its collection of ports and slots, offering close to maximum connectivity for almost every business user. 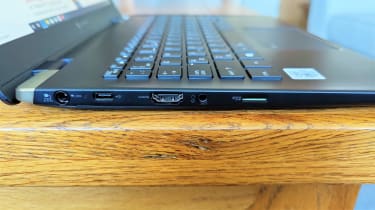 With devices generally becoming slimmer with each passing generation, many traditional ports have been sacrificed in order to save space.. An additional few millimetres of thickness is certainly worth the payoff, however, with the Portege X30L-G featuring two USB 3.0 ports, USB-C, an HDMI port, a 3.5mm headphone jack and a MicoSD card slot. This is in addition to a full-size RJ-45 Ethernet port and support for the latest WiFi 6 standards.

We noted that a number of these ports suffered from minor stiffness when inserting or removing cables, although this doesn’t hamper the quality of connections. One major disappointment, however, is the lack of Thunderbolt 3 support, something you would expect to feature in a premium enterprise device.

Elsewhere, the minute fingerprint scanner - although irritatingly positioned - is generally functional and error-free, as is the facial recognition login via Windows Hello using the 720p webcam fitted above the display. The video quality does, unfortunately, suffer from high levels of noise and a slight degree of fuzziness.

While the Dynabook Portégé X30L-G may not look as flashy or stylish as a number of similarly-priced and specced systems, you can rest at ease knowing it’s a reliable machine at heart.

Although there are one or two flaws with the Portégé X30L-G, Dynabook has built a machine that prioritises substance over style in almost every quarter. Its performance is outstanding, for example, while its 870g weight renders it almost unrivalled in terms of portability, and a strong collection of ports and a beaming display round off a very solid business machine.