Google will start killing off Hangouts in 2021 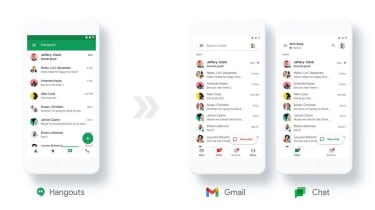 Google will begin transitioning customers from Google Hangouts to Google Chat starting next year, with the former set to be officially killed off.

Chat, a messaging service that was previously only available to paying G Suite users, will be made free as a service within Gmail but also as a standalone app.

The announcement signals the beginning of the end for Hangouts, which will slowly lose features and services as they are shifted over to Chat and other areas of Workspace, the company's new G Suite desktop app.

The transition will start sometime in the first half of 2021, Google said in a blog post, as tools will be made available to help automatically move Hangouts conversations, contacts and conversation history to Chat. The details are still a little vague at this stage, but Google said it will share more guidance soon.

What we do know is that Hangouts will lose support for features such as Google Fi and Google Voice, early next year. It will also lose its call phones feature, to comply with new telecommunications regulations being introduced in the EU and US. The tech giant said it will send notifications to Google Workspace admins to detail the final migration stages in the "coming months".

Google users won't be surprised by the move away from Hangouts, as it was originally hinted back in 2018. According to The Verge, Google has said the switch will be gradual and will include a period of time where both Hangouts and Chat will both be available. However, eventually all free users and Workspace customers will be moved over to Chat where it will then fully replace Hangouts.