Tech companies step up in the fight against US election misinformation 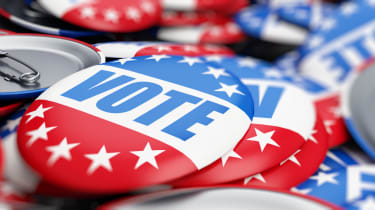 Facebook, Twitter and Google are stepping up to fight against the spread of election misinformation in the US.

Facebook launched its Voting Information Center on both Facebook and Instagram, Twitter is expanding its rules against election misinformation and Google is enhancing its efforts surrounding election security and transparency while also connecting voters to the democratic process.

With Election Day just around the corner, tech companies are taking stock of their impact on US elections. After the 2016 election, companies like Facebook were scrutinized for taking a lax approach to fake news reports and viral misinformation campaigns. This election season though, Facebook, Twitter and Google are taking a different approach.

Together with its registration efforts, Facebook says its Voting Information Center is designed to help every eligible US voter access accurate and easy-to-find information about voting while simultaneously protecting the integrity of this year’s election.

Users of the social-media platform can access the Voting Information Center directly from the menu on Facebook and Instagram to check their voter registration and easily register if they have not yet done so. Users can also see if their state has expanded vote-by-mail options and request absentee or mail-in ballots from their state. Further, Facebook says it will notify users if an important election deadline is approaching so they don’t miss it.

To bolster its efforts against election misinformation, Facebook has launched Voting Alerts to assist state and local election authorities to reach their constituents with important updates concerning voting and has also debuted a "Facts About Voting" section featuring articles on important topics.

"Facebook has built some of the most advanced systems in the world to combat election interference, and we’re always working to improve them. The Voting Information Center will be another layer in this line of defense," said Naomi Gleit, VP of product and social impact at Facebook.

"By providing clear, accurate and authoritative information to people, we will continue to reduce the ability of malicious networks to take advantage of uncertainty around the pandemic to interfere with the election. We encourage people in the US to use this new resource and make their voices heard by voting this fall," Gleit continued.

For its part, Twitter says it is developing new policies "that emphasize accurate information about all available options to vote, including by mail and early voting."

Jessica Herrera-Flanigan, Twitter’s vice president for public policy in the Americas, told Reuters: "We’re focused on empowering every eligible person to register and vote through partnerships, tools and new policies."

Twitter says it anticipates rolling out its new tools, policies and voting resources in the next month. The company says it is exploring how to expand its "civic integrity policies" to address mischaracterizations of mail-in voting and other election-related procedures too.

When it comes to Google, the tech giant has launched two features in Google Search with detailed information about how to register and how to vote. Users who search Google for "how to vote" will now be provided with details about how to vote in their state, registration and voting deadlines along with guidance pertaining to voting in person versus voting via mail.

Google says its Threat Analysis Group (TAG) along with its Trust and Safety teams remain focused on identifying and preventing government-backed attacks against Google and its users as well. It has also launched an Advanced Protection Program, offering additional safeguards for G Suite and Gmail users throughout the election season.

"As we approach November’s election, we will continue to ensure that all of our products are built — and our policies are enforced — in a fair, objective, and nonpartisan way, without regard to political ideology," said Amanda Storey, director of trust and safety at Google.

"Our platforms have empowered people and organizations from across the political spectrum, giving them a voice and new ways to reach their audiences. We’ll continue to keep you updated on all of our work to support the 2020 US election and other elections around the world," Storey continued.