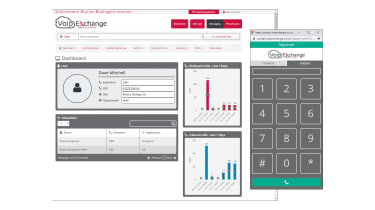 Now into its third year, Voip Exchange is purpose-built as a complete cloud-hosted SMB service that can be rolled out with a minimum of training.

Deployment is a breeze too: a project engineer was assigned to discuss our requirements, and then set up an account with preconfigured phone numbers and a base set of users as per our instructions.

Voip Unlimited also supplies handsets, offering a choice of Snom and Yealink models. We opted for Yealink T48S and T23G sets, and these came preconfigured for each user, so we had only to connect them to the lab’s PoE switch and they were instantly provisioned. Don’t worry if you’re switching from a different VoIP provider: any IP phones you already own will, where possible, be reprovisioned for Voip Exchange.

As usual, management is carried out from a web portal, and this is very easy to navigate. Our account had a single top-level site, but businesses with offices in multiple locations can create subsites for each one, which can all be centrally managed.

Creating new users is a cinch, thanks to a wizard that takes you through each step. We were prompted to provide names, email addresses and mobile numbers, then to indicate which site and department each user was a member of; a DDI (direct dial in) number was then doled out for their preassigned handset.

Once you’ve created your users, you can additionally assign them to huntgroups, so that incoming calls to one person’s number will cause all phones in their group to ring at once – or you can choose round robin mode, to call each phone in order. If no one picks up after a timeout period of up to two minutes, you can specify whether the call should be forwarded to a different user or group, to another huntgroup, to an external number or to an interactive voice assistant.

This last feature is particularly versatile. Callers can be played a custom message, and presented with a menu of up to 12 options – each of which supports the same actions as available for huntgroups, making it almost impossible for an incoming call to be missed.

There are also several settings that users can configure for themselves, either at the point of enrolment or later on. You can set a personal greeting message by uploading a WAV file to your portal, and configure either call forwarding or call twinning, which causes a second number (such as a mobile) to ring simultaneously for incoming calls. The portal also lets you check your voicemail and access the webphone app; install the Voip Exchange Chrome extension and you can initiate calls directly from web pages too.

Almost all of these features are included in the basic pay-as-you-go Voip Exchange package, which costs £8.50 per user per month – the only thing that’s missing is voice recording, which adds an extra £1 per month. Call packages start at £3.50 per user per month, which provides 3,000 minutes per user for calls to landlines and mobiles.

Although web calling is included, you also have to pay a little extra for mobile support: the Android and iOS apps (which are in fact customised versions of the Zoiper softphone app) cost £2 per user each month. We tried the iOS version and found it superbly easy to use, taking mere seconds to register by scanning the unique QR code presented in the user portal.

In all, Voip Exchange is a classy service that SMBs will love: it’s exceptionally easy to deploy and has a strong set of features included in the price.