Huawei P40 Pro+ first look: Zooming above it all

Despite all the troubles, the Chinese firm is still building superb smartphones 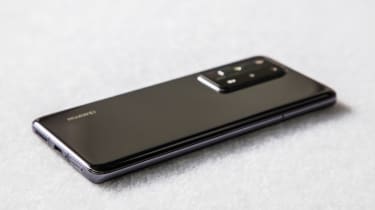 If there is one thing we can definitively say about Huawei, it's that it is a very resilient company. The President of the United States couldn't stop it and neither, it seems, will a global pandemic. Despite everything that's going on, the Chinese firm has launched three new flagship phones: the P40, the P40 Pro and the P40 Pro+.

These follow on from last year's highly successful P30 and P30 Pro, the latter of which had spectacular zooming camera technology. The P40 is the standard model, with the smallest battery and little in the way of special specs, while the Pro is a very beefed-up version of the P30 Pro. Here we will focus on the P40 Pro+, which is the biggest, and possibly the best, of the three.

The first thing you'll notice on the Pro+ (as you will on the other two devices) is its 'Overflow display', which is basically fancy wording for an edge-to-edge display. The screen itself includes cutouts for the front-facing cameras, similar to Samsung's Galaxy range, and there's a new look to the main camera array which is housed in a shiny rectangle with rounded edges, which is also strikingly reminiscent of the Galaxy S20's design. Other than that, there is little difference in design from the P30. 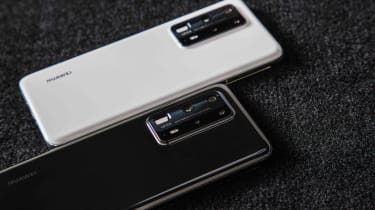 All three models will come in a refreshed colour palette, though: 'Ice White', 'Black', and 'DeepSea Blue'. The Pro+ will have special ceramic versions in 'Silver frost' and 'Blush Gold' too, which are both said to be resistant to fingerprint smears.

The Pro+ has a massive 6.58in screen, which is just slightly smaller than the one on the Samsung Galaxy S20 Ultra. This is an OLED FHD+ display with a 19.8:9 aspect ratio and a smooth 90Hz refresh rate. We can't confirm its quality as we haven't tested it, but these are similar specs to the OnePlus 7 Pro and the S20, and Huawei's displays are usually of similar quality.

All three models will have the Kirin 990 5G processor inside them, which Huawei is suggesting will have 30% more CPU power than the P30. This will come with support for standalone and non-standalone 5G bands - which means it works with current and future 5G bands. Strangely though, the Pr0+ will have a 4,200mAh battery, which is actually a smaller capacity than the P30 Pro, which lasted 21hrs and 22min in our intensive tests. This doesn't necessarily mean it's going to run out quicker, but we won't be surprised if it does. It also supports 40W wireless charging, so that should help when the power drops.

There are updates to the P40's biometric security with a dual selfie camera that has infrared facial recognition technology - which Huawei claims will work in the most challenging lighting conditions. The size of its in-screen fingerprint sensor has also been increased by around 30% and will unlock 30% faster - that seems to be a popular number for Huawei.

It has an EMUI 10.1 skin over the basic version of Android 10. One of the big problems going forward without Google is that Huawei users will miss out on the most popular Google-branded apps, but who needs Google Maps or Gmail when you're one of the biggest companies in the world? Instead, Huawei is simply replacing these with its own versions, so the P40 range will feature preloaded apps to compensate, starting with Huawei's own version of video calling called 'MeeTime'. This can work anywhere and also for multiple users, according to Huawei. It's also an open-source app that the company wants to offer up to developers, as it announced it would back in January when launching the Huawei App Gallery.

The Chinese giant is also getting involved in the world of voice assistants with 'Celia', its answer to Siri. It wakes with the classic "Hey" before Celia, or by holding the power button for a second and it supports all the usual things digital assistants like Siri or Bixby do, with basic commands and some helpful information on objects you capture with the camera. Huawei does have a grand IoT strategy with its Harmony OS and this could potentially be its Alexa.

On the P30 Pro, Huawei took camera technology to new heights, with its amazing optical zoom and light-capturing sensors. The P40 Pro+ is aiming to do the same and comes with an 'Ultra Vision Leica Penta Camera System'. It features five lenses on the back: an 8MP 10x optical telephoto lens, a 50MP RYYB wide lens, a 40MP wide-angle lens, an 8MP 3x optical telephoto lens and a time of flight sensor. To clarify, that's a dual optical telephoto lens that hits 240mm zoom range. 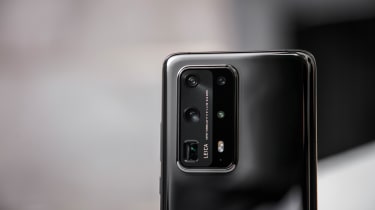 As impressive as the zoom was on the P30, there was an issue with keeping shots still when at full magnification. To counteract this on the Pro+, Huawei has added AI-based stabilisation. This is another area where the company is going above and beyond with camera technology, using AI as an editing system, or to help refine pictures. Or, in one case, to delete people, as the P40 Pro+ will come with software that allows the users to cut out photobombers - or random people in the background - by editing multiple shots into one perfect picture.

The P30 and P30 Pro were both superb handsets with extraordinary camera technology, but they both hit the shops before Donald Trump's cumbersome blacklist. Huawei is now launching smartphones into a market disrupted by COVID-19 and doing so without Google apps.

There is a worry that this device might get ignored without full Android, but that would be a shame because the P40 Pro+ looks like another knockout device from Huawei. It has a huge display, exciting AI features and superzoom cameras. Despite a relentless campaign from the US, and the global pandemic, we hope Huawei's P40 Pro+ zooms above it all.

Share on FacebookShare on TwitterShare on LinkedInShare via Email
Advertisement