What is the Internet of Things (IoT)?

Wondering about the Internet of Things? Here's our guide to all things connected 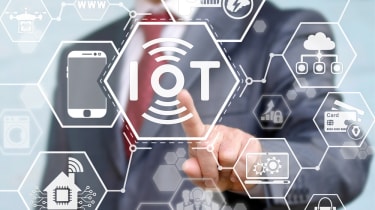 The Internet of Things (IoT) is an umbrella term used for any device connected to the internet, which, in this modern world, could mean practically anything.

This basically translates to the idea that thanks to the internet, all devices are capable of communicating with each other and of feecking back data to a central hub. On the consumer end, some of the examples include smart speakers and virtual assistants. On the business side of the spectrum, IoT tech brings information and insights which facilitates the operations of enterprises.

The origins of IoT are comparable to those of spaghetti bolognese - no one is 100% certain where it came from. However, according to an IBM blog, it can be traced back to 1981, ten years before the World Wide Web was opened to the public, when a group of Carnegie Mellon students configured a vending machine in order to monitor its stock levels remotely.

In spite of its elusive beginnings, IoT has established itself as an everyday element of modern life. Smartphones, laptops, lights, even cars and fridges - all of these are examples of daily IoT use. Basically anything which is some form of electronics can be connected to the internet in order to communicate with other devices.

IoT is present in every sector, from healthcare and retail to even fish farming. Moreover, it is also a fast-growing system which is spreading across an increasing number of industries, as more businesses realise how to apply IoT in order to gain a competitive advantage.

What exactly is IoT?

IoT (Internet of Things) is a fairly wide-ranging definition, essentially covering any device that is capable of communicating with other devices over the internet. We have so far seen two major applications of IoT, those in the consumer space and those in industry.

For consumers, IoT devices tend to have simple functions. For example, a home may contain a smart TV, itself an IoT device, connected to a mobile phone to be used as a remote. Or a smart speaker, such as the Amazon Echo, may be synced to a home's heating system to control temperature through voice commands.

Within the industry, the principles are the same, only on a much larger scale. The world's busiest shipping lanes are now managed by IoT devices, with remote sensors automatically logging cargo and syncing the data from a port to a central hub.

However, the scope of IoT is widening all the time, as almost every device imaginable is becoming 'connected' in some way.

The smart-home assistant is one of the most recognisable and widely used IoT devices, and despite it being a relatively new concept on the consumer stage, there are now dozens of products available on the market. While companies like Amazon and Google were among the first to popularise the tech, traditional speaker manufacturers have now jumped on the ever-prevalent tech trend.

Why is IoT so important?

It's somewhat inevitable that with the growing availability of faster and more reliable broadband, devices will soon come with the ability to connect to WiFi as standard. The IoT is already beginning to shape the way we manage our daily routines; cars are able to sync with calendars to track appointments and plan best routes, and smart assistances have transformed shopping into a conversation.

Yet, by far the most compelling application of IoT can be found within industry, where AI is revolutionising the way we do business. Smart cities are helping us to cut down on waste and energy consumption, while manufacturers are now able to use connected machines that automate repair call outs. Connected sensors are now even seeing use in farming, where they are helping to monitor crop and cattle yields and predict growth patterns.

In 2016, hackers used an IoT enabled fish tank as a gateway into a North American Casino's network. The tank was supposedly kitted out with sensors to regulate temperature and notify its owner about feeding times and configured to a single VPN. Somehow, the hackers managed to breach that and gain access to further systems within the casino.

While it is a funny story, it also highlights the dangers of IoT in that each device you have can also be a gateway into your entire network. For businesses that have whole factories running IoT machinery, or offices that have IoT hardware, making sure everything is secure can be a big headache.

A part of the problem can be default passwords that are easy to crack. This was the main focus of a UK government proposition called 'Secure by Design' that called on manufacturers to embed security into the design, rather than adding it after its built.

This is quite important for IoT, especially as almost anything can be internet-enabled and this can sometimes mean so-called 'headless devices'. Something that doesn't have a way to modify a password because it has rudimentary controls or no interface.

What lies ahead for IoT?

There's a lot of technologies that have futures tied to the success of IoT, such as driverless cars, smart cities and various applications of AI. According to Norton, 4.7 billion things were connected to the web and this is predicted to jump up to 11.6 billion by 2021. The growth is there, but a number of other factors will have to increase too.

Stronger regulations and stricter security controls will play a large role in our IoT future. As more devices enter organisations, attackers will have more opportunity to gain access. For IT departments, this could be like trying to stop water leaking through a sieve.

There are also ethical questions to think about. With many of these devices used for extracting data, the more common they become in the workplace and wider society, the more of they will infringe on privacy.