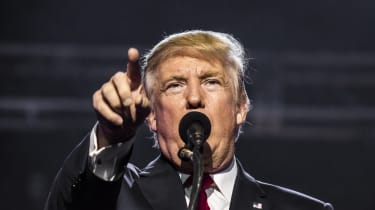 Over the weekend, Twitter and President Donald Trump were at it again, as the social media company flagged one of Trump’s tweets as violating “Twitter Rules about civic and election integrity.”

In the tweet, the President continued bemoaning Democrats’ support of mail-in voting amid the coronavirus pandemic and the voting fraud he claims it’ll create. Twitter allowed the tweet to remain but placed a warning above it that reads, “This Tweet violated the Twitter Rules about civic and election integrity. However, Twitter has determined that it may be in the public’s interest for the Tweet to remain accessible.”

In the tweet, Trump wrote, “So now the Democrats are using Mail Drop Boxes, which are a voter security disaster. Among other things, they make it possible for a person to vote multiple times. Also, who controls them, are they placed in Republican or Democrat areas? They are not Covid sanitized. A big fraud!”

This is not the first scuffle between social media companies and the commander-in-chief. Just a few weeks ago, Facebook and Twitter removed posts by Trump that claimed children were “almost immune” from COVID-19. Twitter also dinged Trump twice in June for copyright infringement and “manipulated media.” And back in May, Twitter restricted a Trump tweet for “glorifying violence.”

President Trump struck back in May with an executive order aimed at overturning Section 230 of the Communications Decency Act 1996. The executive order has yet to create problems for social media companies, and some experts say it would meet severe legal challenges if he tried to enforce it.