The Chinese firm continues to build beautiful smartphones, but it can't replicate Google

You wouldn't begrudge Huawei if it celebrated Donald Trump's election defeat, given the damage his administration's sanctions have caused. The Chinese firm is now on its third smartphone without Google Play services and its sales in the west are starting to lag.

There is no guarantee that the new president-elect, Joe Biden, will lift the sanctions but Huawei remains undaunted. It's continuing to invest heavily in the development of its own app ecosystem and the Mate 40 Pro 5G is the latest device on which we can measure these efforts.

One of the real tragedies of the trade ban is that it has coincided with the release of some of Huawei's best hardware. The firm has launched a spectacular body of work over the last three years, all consisting of very original and eye-catching designs, and the Mate 40 Pro is another work of art. The device features a shiny glass body and a futuristic central camera module - which Huawei calls a 'space ring', as it takes inspiration from the first photo of a black hole.

As with last year's Mate 30 and 2020's P40, the screen has Galaxy Edge-style curves along either side. These create a wrap-around look to the device, where the bezels practically disappear - they're still noticeable at the top and bottom, but not too much. It adds to the overall tidiness of the screen, which looks neater than the Mate 30 with its front cameras in a cutout in the top corner, rather than a central notch. There's also a red power button on the side - which is a nicely understated feature.

Our review model came in a colour which Huawei insists is black, though to our eyes, it's decidedly grey. The only other option available in the UK is 'Mystic Silver' which is a little more appealing as it reacts better to light. The phone is so well designed, however, it could probably pull off any colour. It also comes in 'Olive Green' and 'Sunflower Yellow', but these fancy shades are only available in China, where Huawei is appreciated that little bit more. 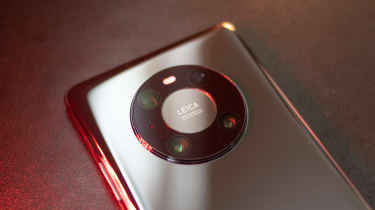 The Pro's 6.9in OLED display comes with a 1,344 x 2,772 resolution and an 18.5:9 aspect ratio. This also includes a 90Hz refresh rate, which isn't quite as much as the Samsung S20's 120Hz, although it is still a very smooth display. This, combined with its 94% screen to body ratio, creates a deeply immersive experience. We'll go into more detail about the cameras later, but this screen's vivid colours and smooth refresh rate make the perfect accompaniment.

In our calibrator tests, the Mate 40 Pro scored 99.9% sRGB colour coverage and 140.9% colour volume. That's as good as you can get right now; almost identical to the P40 and on par with both Ultra versions of Samsung's S20 and Note 20. Its brightness topped out at 272.6 cd/m2, which is significantly less impressive, but this didn't really show in daily use. The screen handled most bright conditions with little issue - although it may struggle in blazing sunshine.

Under the hood, Huawei has given the Mate 40 Pro a serious upgrade. We're not talking about a small power bump either. There's a Kirin 9,000 chip inside it, built with a 5nm process, matched with 8GB of RAM and 256GB of internal storage. Huawei has suggested this processor is superior to the 5nm A14 Bionic chip in Apple's iPhone 12, but for reasons that will become clear, we can't definitively say whether or not this is accurate.

You'll understandably be tired of hearing it by now, but Huawei can't download apps from the Google Play store - which means we can't run the GeekBench 5 tests which we usually use to measure performance. Instead, we used the Antutu benchmark app, in which the Mate 40 Pro scored 848,854. For context, that's almost double what the P40 Pro managed. We may not be able to match this with the iPhone, or the S20, but it is safe to assume that it's a super-fast device. Phones generally have more power than they need in any case, and our day to day experience of the Pro suggests it can handle everything with ease. 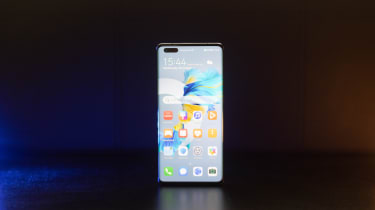 Sadly, the same isn't quite true of the battery. In our looped video test, the Mate 40 Pro's 4,400mAh battery lasted 16 hrs 31 mins. That's almost an hour less than the 17 hrs 14 mins of the P40 Pro, which isn't an amazing score itself. The Samsung Galaxy s20 Ultra lasted over 22 hrs, just to compare it to a similarly priced rival. The processor and its power-hungry display could be the reason for its poor battery life. Turning off the 90Hz refresh rate did help, though that means dropping down to 60Hz. In day to day use, however, the battery life is acceptable. There's more than enough juice to keep it going from morning to night, assuming you're not straining it too hard, and there's a 66W fast charger in the box.

As mentioned, Huawei has moved heaven and Earth to bulk up its App store. To its credit, there is quite an array of services available, but very few of these can replace your favourite Google ones. There's no WhatsApp, for instance, or any kind of decent replacement. The company's pre-installed search app 'Petal' can help you find the likes of Facebook and WhatsApp as APK files which you can then side-load onto the device, but it isn't as smooth an operation as you'll be used to, and it also puts you at increased risk of malware infection. Until it gets access to full Android or, more likely, builds a decent enough ecosystem of its own, this will always be a turnoff.

It's a shame because elsewhere, the Mate 40 Pro is brimming with innovation. The screen wakes in your presence; it senses your face from the side, lighting up and seamlessly moving into the facial recognition software. From reaching out to opening it, users hardly need to press anything. There are also lots of artificial intelligence applications running in the background, notably with the cameras. For example, the systems can read and translate foreign text in real-time.

The only area in which it seemed less intuitive is its default navigation setting, where users swipe up or hold to close or switch apps, similar to the system used by Google's more recent Pixel devices. This will be fine for some but as with the Pixel, we found it a little problematic and quickly switched back to the more common three-button navigation setting found on most Android devices. 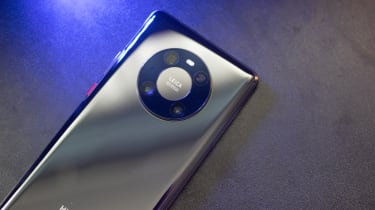 Not having Google, and other US components, is an unwanted headache, but it could have been (and potentially still can be) a lot worse. Imagine the German government handing out sanctions, for instance. That would stop Huawei collaborating with Leica. How well would its devices sell without those astounding cameras?

The Mate Pro is housing a 50MP f/1.9 wide-angle camera, a 12MP f/3.4 telephoto lens and 20MP f/1.8 ultrawide snapper. There's a mere 5 x optical zoom on the Pro, with the full capabilities saved for the P series. It is perhaps more useful to everyday life, however. The P40 has double that for optical zoom which is little more than a gimmick; does anyone really need a fuzzy close-up of the moon?

There's also a 13MP f/2.4 selfie cam with a time-of-flight (ToF) sensor that measures the depth between the camera and various points of the subject by timing the travel of infrared light.  This is certainly impressive, but it's arguably more than you need for a selfie camera. 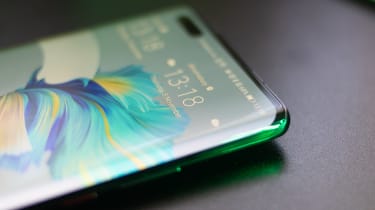 This is the coolest device Huawei has ever produced and arguably one of the best around at the moment. Sadly, it's difficult to recommend; particularly with its £917 price tag, but mainly because it hasn't got the Google Play store.

It's also hard to review Huawei products without mentioning Google, because until it gets its app ecosystem up to a good enough standard, there will always be a feeling it's lacking. It doesn't matter how good the hardware is: if you have to live without your favourite apps and services, that makes it a tough Mate to love.