From its chatbot to fraud detection and trading data analysis, BoA is embracing artificial intelligence in a big way 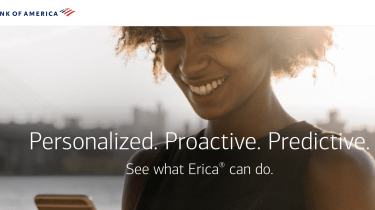 The banking sector may not be the first place you think of when you consider the application of artificial intelligence (AI), but it’s far more widespread than you might think. Indeed, most banks have a dedicated data science team and have had for some time, with AI and machine learning (ML) increasingly taking a supporting role. This can help with pattern analysis and detecting problems such as fraud, as well as identifying business opportunities.

More recently, however, consumer banks are developing customer-facing AI systems. While many of these are fairly rudimentary chatbots, Bank of America has developed a system that proactively helps its customers - Erica.

Keeping an AI out

To understand Bank of America’s use of AI, both consumer-facing and behind the scenes, it’s important to understand the evolution of data science and AI in banking and finance more generally.

One of the most common uses globally is in fraud detection through behavioural profiling.

“Behavioural profiling has had more than two decades of use in fraud detection today and is a proven methodology for understanding normal from fraudulent behaviours,” Dr Scott Zoldi, board director at San Diego Cyber Center of Excellence, tells IT Pro.

“Using AI for fraud detection and behavioural profiling removes unnecessary friction. Unlike other approaches, it does not alert customers in cases where it is likely to be a false positive, which prevents disrupting a customer’s use of banking services.”

Indeed, this is largely what Bank of America is doing. Speaking to American Banker in 2018, Hari Gopalkrishnan, client-facing platforms technology executive at Bank of America, said: “In many areas where we traditionally leveraged things like analytics, we're trying to get a handle on how can machine learning and AI help.

“Think of fraud. Fraud management is all about understanding customer behavior, understanding what's normal and what’s not," he continued. “Armed with more insight about channel behavior [through AI], we're able to run much better algorithms, to understand what is true fraud.”

Another area where BoA is experimenting with AI is in trading. Also speaking to American Banker, David Reilly - then CTO, now CIO of global banking and markets - said: “There are now two million more events we're recording than we used to get before. Those two million events tell you where we won and where you lost.”

Thanks to regulations such as the European Commission’s Markets in Financial Instruments Directive 2, this data is available to all of BoA’s competitors, and vice versa.

Diversity in the digital workplace

“All that information you could use, if you could get that insight. You could far more refine your offerings to your clients. Analytics in real time, drawing insight from all those data flows, is untapped for us. That's the area - inline, not post-event analytics and insight - where there’s the biggest opportunity.”

The organisation is also considering using AI in the hiring process to identify the best talent. However, it’s aware of the fact that in HR settings, AI is often found to be biased, selecting primarily white, middle-aged men who enjoy golf for senior roles as that’s the profile of the majority of individuals who have already followed that career path within the company.

Nevertheless, Reilly said that by knowing these pitfalls are there, the same technology can be programmed to ignore these elements and get to “the meat of the profile of the person and understand it in a deeper way”.

Focus on the customer

Chatbots are becoming an increasingly common way of interacting with customers across all verticals, not just banking. They streamline interactions, particularly at the initial stages of contact and can even resolve some more basic requests, freeing up staff to deal with more valuable tasks.

“Banks want to meet their customers where they are and understanding the best ways to communicate, service, and anticipate customer challenges will be a key differentiator,” Zoldi explains. “The recent introduction of chatbots help [them] engage more effectively and efficiently with customers.”

In the case of Bank of America, this is more than just “meeting customers where they are”, however. Erica, unveiled at the Money 20/20 conference in October 2016 and released to the public in June 2018, uses natural language processing to understand queries and also works proactively to help customers.

According to CNBC, Michelle Moore, then Bank of America’s head of digital banking, told attendees of the conference that the chatbot - a play on Bank of America’s name - might send a predictive message such as “Michelle, I found a great opportunity for you to reduce your debt and save you $300”.

If the user taps the message, they will see Erica’s full advice, which could be along the lines of: “Based on your typical monthly spending, you have an additional $150 you can be putting towards your cash rewards Visa. This can save you up to $300 per year.”

It is this kind of predictive, proactive behaviour that has led industry watchers to describe BoA’s chatbot as one of the most advanced in banking, even as competitors launch their own customer-facing AI initiatives.

According to Venkatesh Varadarajan, a partner in financial services at Infosys Consulting, the reason Erica has proven particularly successful is twofold: it can replicate virtually any customer interaction with the bank and is as easy to use and conversational as commonly used home AI - i.e. digital assistants - such as Amazon’s Alexa.

“If you look at all the transactions you can do using Erica, like checking balances transactions, or let's say, I want to know how much money I spent in the last month at Starbucks, you can do that within the chatbot,” he tells IT Pro.

“And, rather than the old way, which is calling a contact centre and then waiting in the queue and pressing multiple buttons – you go option one and then option four and so on – and you wait in the queue for a long time, with the chatbot you can actually do this in real time and the whole experience is much better.

“There is a novelty value as well, because a lot of customers, especially the younger generation would like to experiment with these new tools rather than go the legacy way you know, so to speak, and that's helped [BoA] quite a bit.”

Varadarajan's analysis is born out by BoA's own statistics: the vast majority of users (49%) who had signed up within the first 12 months of Erica's existence were millennials, with Gen X making up the next largest group (20%). Baby Boomers and Gen Z - while they may sit at opposite ends of the generational spectrum - came in almost level at 16% and 15% respectively.

While chatbots are becoming more prevalent in consumer banking, most still have a way to go before they can meet the abilities of Erica. While it’s not clear how much of a draw the chatbot is for new customers, it’s undoubtedly helping those who are already with Bank of America.

For those already in the finance industry, the benefits both of this and back-end AI are clear. For other industries, proactive, helpful chatbots could be the next step forward in revolutionising customer service.