Skip to ContentSkip to Footer
Vs

Slack vs. Microsoft Teams: Business messaging apps battle it out

Slack and Teams are leading business communications apps, but each caters to a different working style 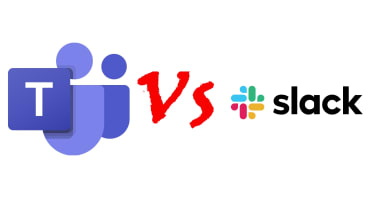 Rumor has it that way back in 2016, Microsoft made the decision to pass on the potential acquisition of Slack. Wanting to forgo a hefty $8 billion price tag, the company instead chose to expand upon its existing Skype for Business model, which ultimately led to the creation of Microsoft Teams. Launched in 2017, Teams has changed teleconferencing in many ways.

Numbers aside, how do these collaboration platforms stack up against one another?

When it comes to pricing, it all comes down to user needs. While Slack and Teams offer generous free plans for users looking to test the waters, growing organizations and larger businesses may feel limited by the free plans’ constraints. To get the most out of these programs, companies may see it worthwhile to upgrade to paid plans.

While the entry-level Office 365 Plan, which will soon become Microsoft 365, includes Microsoft Teams and costs $5 per user per month, companies must make an annual commitment to get started.

Meanwhile, upgraded Slack and Microsoft Teams plans come in at $12.50 per user per month. While they may cost the same, keep in mind that Teams comes with the added benefit of Office 365.

Being a Microsoft product, Teams integrates quite well with Microsoft’s suite of Office 365 products. For those who use programs such as SharePoint, OneNote, Power BI or Planner frequently, integrating them with Teams is simple. Microsoft also offers a range of third-party apps users can integrate into Teams with ease.

Slack, on the other hand, boasts a directory containing over 2,000 apps users can integrate into Slack, including Google Drive, Asana, Salesforce and more.

Both platforms also come fully equipped with helper bots known as “Slackbot” for Slack and “Who bot” for Teams. Each bot answers user questions and assists with organization and productivity.

Slack and Teams include audio and video meetings, Teams goes above and beyond. Years upon years of experience have gone into Teams’ creation, tailoring it to meet the needs of small and large businesses. Even with the free Teams version, users can host meetings with up to 250 attendees. Upgraded plans allow for up to 10,000 attendees.

Slack’s free plan allows only one-on-one audio and video calls, and there’s no option for screen-sharing without an upgraded plan. Further, when using Slack’s paid plans, only 15 attendees can participate in audio, video and screen-sharing.

Both Teams and Slack offer chat room capability and offer real-time notifications to alert users when someone mentions them by name in a specific thread. Each tool also allows users to send direct messages and hold private conversations.

Microsoft Teams and Slack each offer two-factor authentication and data encryption. That said, Microsoft categorized Teams as Tier D-compliant, meaning all of Microsoft’s industry-leading compliance commitments are enabled by default.

As if that wasn’t enough, Microsoft Teams also provides more extensive admin controls than its competition. Not only are DLP and data governance controls available to admins, but admins can also modify member, owner, file and SharePoint permissions.

Teams continues to outshine Slack when it comes to user help and support. When using the free version of Slack, users only have access to ‘Standard Support’ services. For 24/7 support, users must upgrade to a paid version. If users require priority support with a four-hour response time, Slack’s “Plus” may be a fit.

Microsoft Teams, though, provides its users with 24/7 phone and online support in free and paid plans.

Slack vs. Microsoft Teams: The verdict

Either Microsoft Teams or Slack will make an excellent choice for teams looking to invest in a collaborative workspace app. Both programs are designed with collaborative teams in mind, but each comes with its own strengths and weaknesses.

For Microsoft Teams, its increased security and compliance measures, and its seamless integration with Office 365 makes it a remarkably well-rounded choice for more complex businesses. Teams also excels when it comes to video meetings. Unlike Slack, even the free version of Teams allows its users to host meetings with up to 250 attendees.

Slack, on the other hand, can be a great choice for smaller teams and those that spend most of their time working remotely. With its focus on messaging, Slack makes consistent communication among team members an easy feat. Further, consider Slack’s long list of available app integrations, and businesses can mold it to meet their teams’ specific workflow needs.

Not to mention, Slack is also fun to use. Unlike Teams, Slack allows its users to post messages using aliases that could be just about anyone, including the legendary Beyonce to everybody’s favorite manager Bill Lumbergh. Slack also puts an endless amount of custom emojis at its users’ fingertips. It even allows them to create an emoji using a favorite photo.

Unfortunately, Slack’s biggest downside is it isn’t as comprehensive as Teams. While Slack offers a myriad of integrations, Teams offers far more capabilities when it comes to larger meetings and provides superior user support.

Of course, solving this puzzle isn’t quite as simple as choosing one program over the other.  Depending on organizational needs, each tool may prove itself as more than useful. Each program also offers a free version. Our suggestion? Take each for a test run to determine whether it’s Slack or Microsoft Teams that best suits your team’s needs.